With this Super Move, Koichi is able to turn the repulsion force emitted from his limbs into a suction or adhesive force; allowing him to stay strongly attached on any surface, even though this is the one of a moving bullet train. To make this thing work, Koichi must alters the direction of the force of his Quirk.

He discovered this requirement by accident, when he jumped on a moving train, but apparently it's something he's been doing subconsciously. When he felt his body was lifting off during the turns or against a headwind, he simply repressed it.[1]

It is not necessary for Koichi to use all his limbs for this new movement, he can use only his feet to cling himself on a surface thus leaving his hands free to attack. 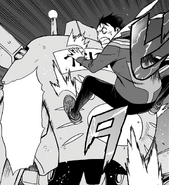 Retrieved from "https://bokunoheroacademia.fandom.com/wiki/Wall_Cling?oldid=281737"
*Disclosure: Some of the links above are affiliate links, meaning, at no additional cost to you, Fandom will earn a commission if you click through and make a purchase. Community content is available under CC-BY-SA unless otherwise noted.