Two Heroes (の, Futari no Hīrō?) is the special tie-in volume released alongside the film My Hero Academia: Two Heroes.

The top portion of the logo is white surrounded by a white, blue, and black color gradient, while the bottom portion has a white, yellow, and red color gradient. The author's name is printed in white with a black outline and is placed in the bottom right corner. The cover shows the main students of Class 1-A featured in the film, including Izuku, Katsuki, and Ochaco, who are all dressed in their formal clothing. Along with Melissa, they are all falling downwards towards I-Island, as sundown is taking place in the background.

Horikoshi talking about the movie. 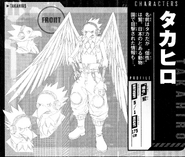 The bird man that Horikoshi references in Hawks profile, who appeared in Two Heroes

Retrieved from "https://bokunoheroacademia.fandom.com/wiki/Volume_Origin?oldid=265778"
*Disclosure: Some of the links above are affiliate links, meaning, at no additional cost to you, Fandom will earn a commission if you click through and make a purchase. Community content is available under CC-BY-SA unless otherwise noted.