"Yaoyorozu Rising" (：ライジング, Yaoyorozu: Raijingu?) is the eighth volume of the My Hero Academia series.

The title logo is white and yellow with shades of black and white. The author's name and surname is written in black with a white outline, and is located on the bottom left of the cover.

The cover features Izuku, Katsuki, All Might, Minoru, Tsuyu, Shota, Shoto and Momo, with each of them in a section of the cover, except for Momo; they are also in their hero costumes. All Might is in the middle section, with Katsuki on the left and Izuku on the right. Minoru is in between Katsuki and Shota while Tsuyu is in between Izuku and Shoto. Shota is in the bottom left and Shoto is in the bottom right. Momo is in the front of the cover, being the focal point.

The volume cover shows Ochaco slyly sticking out her tongue while winking, with the title, volume number, and author's name written on her face and neck.

The U.A. students have reached the practical portion of their final exam, but they didn’t expect to have to beat their own teachers in order to pass! Paired with his archrival Katsuki, Izuku has to try to take on none other than All Might himself. Working with Katsuki is one thing, but is giving everything he’s got to beat All Might more than Izuku can handle? And in a nearby arena, Momo and Shoto endure a similar struggle. Meanwhile, a sinister new adversary prepares to make a move…

Minoru is jealous of Hanta. 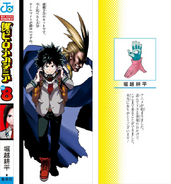 Retrieved from "https://bokunoheroacademia.fandom.com/wiki/Volume_8?oldid=281852"
*Disclosure: Some of the links above are affiliate links, meaning, at no additional cost to you, Fandom will earn a commission if you click through and make a purchase. Community content is available under CC-BY-SA unless otherwise noted.