Struggling (く, Ugomeku?) is the sixth volume of the My Hero Academia series.

The background color of this volume is gray and red, matching with Stain's gray mask and red scarf. The title logo is black and white with shades of yellow and blue-green. The author's name and surname is written in white and is located on the bottom right of the cover.

The cover focuses on Stain, sticking out his tongue. Izuku is on the bottom left of the cover wearing his new Hero costume and preparing for battle; Tenya is behind Izuku facing forward, giving the impression that Tenya has Izuku's back.

The volume illustration features Izuku and Ochaco in a convenience store, with Ochaco sitting on the counter. Both characters are in work uniforms, and are wearing large hats of Fumikage and Minoru, with Izuku wearing the former and Ochaco wearing the latter.

In the aftermath of the sports festival, the Class 1-A students begin their internships. Izuku goes to study under Gran Torino, who was once All Might’s mentor. Gran Torino appears to be a washed-up nutjob, but the old hero still has more moves than a football team, and Izuku has a lot to learn! Elsewhere, the League of Villains enacts another sinister plot and unleashes a terrifying new enemy!

How Izuku was in middle school.

The truth behind Eraser Head name.

How Ochaco saves money on food.

Anime of the manga is announced. 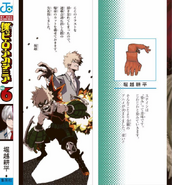 Retrieved from "https://bokunoheroacademia.fandom.com/wiki/Volume_6?oldid=281851"
*Disclosure: Some of the links above are affiliate links, meaning, at no additional cost to you, Fandom will earn a commission if you click through and make a purchase. Community content is available under CC-BY-SA unless otherwise noted.