Day-Tripping Down to Naniwa!

Day-Tripping Down to Naniwa! (浪花の街に出張やで!, Naniwa no Machi ni Shutchō ya de!?) is the fifth volume of the My Hero Academia Vigilantes series.

The cover features Fat Gum and Eraser Head on the top with The Crawler on the bottom as they look away.

The illustration features a tiny The Crawler.

Disaster at the Marukane department store’s grand reopening was averted thanks to the efforts of Koichi, Pop Step and their band of low-end idols. But a greater calamity was prevented by the clash between Knuckleduster and Kuin Hachisuka, who was possessing Tamao, Knuckleduster’s own wayward daughter! In the end, Knuckleduster nearly had to kill Tamao to free her from the villainous entity possessing her. Now that he has achieved his goal and saved her, is Knuckleduster through with his life as a vigilante? 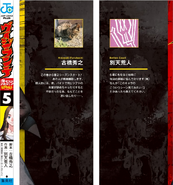 Retrieved from "https://bokunoheroacademia.fandom.com/wiki/Volume_5_(Vigilantes)?oldid=246923"
*Disclosure: Some of the links above are affiliate links, meaning, at no additional cost to you, Fandom will earn a commission if you click through and make a purchase. Community content is available under CC-BY-SA unless otherwise noted.