Why He Gets Back Up

Why He Gets Back Up (彼は何故立ち続けたか, Kare wa Naze Tachi Tsuzuketa ka??) is the twenty-first volume of the My Hero Academia series.

The title logo is orange and yellow, and is decorated by a fire pattern, which is more saturated to either side. The author’s name is written in white in the bottom left corner, and the background color is pitch black.

In the centre of the cover, Hawks stands with his back turned, looking over his shoulder with his wings spread upwards to each side, with some sort of dark blue fire radiating from around his head. Endeavor stands behind him, his hands are bladed up into fists out to the sides and his teeth clenched. He wears his updated hero costume, with large bursts of fire erupting from his eyes, hips, and, most prominently, his shoulders, the tall flames following the direction of Hawks’ wings.

Class 1-A’s joint battle training with Class B continues! Class 1-A get the first win in the best-of-five series of all-out Quirk battles, but after some feedback from the teachers, the students square off again for a second round, and real rivalries form.

7th wielder of One For All, Nana Shimura.

Kinoko in her Hero costume colored. 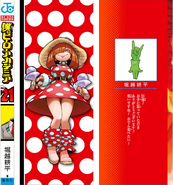 A preview for Volume 22.

Retrieved from "https://bokunoheroacademia.fandom.com/wiki/Volume_21?oldid=232583"
Community content is available under CC-BY-SA unless otherwise noted.