"Rage, You Damned Nerd" (れクソナード, Takere Kusonādo?) is the second volume of the My Hero Academia series.

The background of the colored cover is red and the title logo is white, light blue and yellow. The author's name is printed in white and located at the bottom of the cover.

All Might, in his true form, is featured on the spine over a red background, wearing a yellow suit. The volume illustration features Ochaco and Tsuyu in their hero costumes, posing together. Behind them, Izuku watches, in his school uniform. The back cover depicts Thirteen and Backdraft.

Getting into U.A. High School was difficult enough, but it was only the beginning of Izuku’s long road toward becoming a superhero. The new students all have amazing powers, and although Izuku has inherited All Might’s abilities, he can barely control them. What’s more, the first-year students are told they will have to compete just to avoid being expelled! 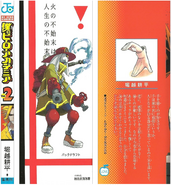 Retrieved from "https://bokunoheroacademia.fandom.com/wiki/Volume_2?oldid=272750"
*Disclosure: Some of the links above are affiliate links, meaning, at no additional cost to you, Fandom will earn a commission if you click through and make a purchase. Community content is available under CC-BY-SA unless otherwise noted.