The cover is a picture of Lemillion in his hero costume, including his battered cape blowing in the wind, looking sternly at the reader. He is set against a bright yellow background with some of the spikes that were created by Overhaul in the fight he had with him.

The volume illustration shows off the new team of Edge Shot, Kamui Woods, and Mt. Lady chasing after and taking down a criminal with a Quirk that enables him to fly as he attempts to escape with a presumably stolen briefcase.

The back features Midnight on half of the cover, and on the other half is a picture of an orange and yellow variation of Kohei Horikoshi's avatar with an orange background.

The Volume Illustration feat. The Lurkers.

The raid on the Hassaikai gang is in full swing, and the heroes plunge into the darkness toward their ultimate confrontation. Lemillion engages Overhaul in an attempt to rescue Eri, and the battle reaches a new level of intensity. Izuku is desperate to help his mentor, but what fate has Nighteye foreseen for them all in this clash? And does the key to Izuku’s survival lie in Eri herself?

Explanation to why Overhaul keeps the scar Magne gave him.

Horikoshi thanks the authors of Vigilantes for art they've drawn for him.

Himiko and Twice drawn by the authors of Vigilantes. 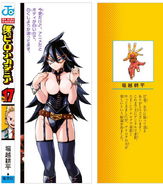 Retrieved from "https://bokunoheroacademia.fandom.com/wiki/Volume_17?oldid=264444"
*Disclosure: Some of the links above are affiliate links, meaning, at no additional cost to you, Fandom will earn a commission if you click through and make a purchase. Community content is available under CC-BY-SA unless otherwise noted.