This article is about the My Hero Academia: Vigilantes character. For the minor villain from the Pro Hero Arc, see Teruo Hazukashi.

Teruo Unagisawa (, Unagisawa Teruo?)[2] is a young fan of Pop☆Step from My Hero Academia: Vigilantes.

Teruo is a small young man that looks like a middle schooler at most, but he's actually 19. He has a rounded head and eyes along with a notably wide nose. He is almost completely bald except for a tuft of black hair on the crown of his head.

Under Trigger's effects, his body turns into that of a large, eel-like creature with a lamprey mouth.

After being kidnapped and turned into a Next-Level Villain by the Villain Factory, he looks like a huge, electric eel-like creature with rows of eyes, and bulky limbs. 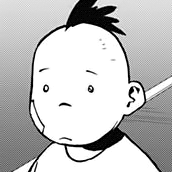 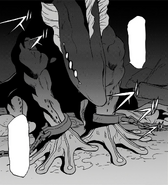 Teruo is naive and has low self-esteem. He recognizes that he is weak and something of a blockhead.

He is known for being an obsessive fan of Pop☆Step, which makes him make hasty decisions. Even after being turned into a Next-Level Villain, he still only thinks about Pop☆Step.

Teruo appears for the first time in a large congregation of fans of Pop☆Step, who had come to see her perform on the street. He tries to approach her, but the audience pushes him back, knocking him down. Ichimoku Samazu and Jube Namimaru help him and advise him that it is not okay to become obsessed with Pop☆Step.

However, desperate to touch his Idol, Teruo ignores them and injects Trigger, turned into a a eel-like Instant Villain who starts to chase a terrified Pop through the streets, asking her for a handshake. Koichi Haimawari and Knuckleduster try to stop him, but the mucus on his skin makes him slippery, making any of their attacks ineffective.

They draw a new plan, using Pop as bait. They manage to convince her to handshake Teruo, and while he is distracted, Koichi and Knuckleduster throw large quantities of flour to him, that drains all the liquid from the mucus. When losing his protective mucus, Knuckleduster gives him a beating and stops Teruo, being later arrested by the police.[3]

The next day, Teruo is interrogated by the police to find out where he got the Trigger he used, but like almost all of the suspects who underwent villainification, he tells them that he received it from someone he does not know. Aware that they can not get much more information from him, the police decide to let him go without charges. When Teruo leaves the police station he reunites with Ichimoku Samazu and Jube Namimaru and spends his time together, not knowing that he is being followed by Naomasa Tsukauchi.

But Kuin Hachisuka has other plans for Teruo. Kuin uses her syringe bees to dose an entire crowd with Trigger. In an instant an ordinary crowd of people turns into a horde of monsters with out-of-control powers, having to being stopped by several Pro Heroes. During the chaos and confusion caused by this outbreak, Teruo separates from his friends, meeting Kuin shortly after, who convinces him to accompany her.[2]

After weeks of not knowing him, Teruo becomes completely unrecognizable, being a huge monster even more mutated than his Trigger form.[4]

Kuin decides to use Teruo to cause a big uproar in a concert in which Pop☆Step participates, with the intention of taking advantage of the disarray and dose more people with Trigger.

As he moves towards the concert, Teruo unleashes chaos through the streets, forcing Shota Aizawa to try to stop him before he causes further damage. Aizawa realizes that there is something strange about him: Since he moves as if he was not used to such massive body, at first he thinks he has a transformation Quirk, and probably consumed Trigger. However, after checking that his Erasure does not affect him, realize that there is something else.

Whatever it is, Shota try to stop him, and when his blows do not affect Teruo, he decides to retain him with his Capturing Weapon, but Teruo defends with a great electrical discharge that blinds momentarily to Aizawa and electrocutes to several innocent people. Despite this unforeseen counterattack, Eraserhead manages to recover and ultimately defeat Teruo, who is taken into custody by the police.[5]

During the following days, Teruo will be the subject of much investigation by the police, who inform the Heroes that, during the days he was missing, someone experimented with him, receiving numerous modifications to his body and being injected with large quantities of Trigger, making his transformation permanent.[6]

Despite the problems he caused, Teruo is released and continues to attend Pop☆Step plays.

Eel (ウナギ, Unagi?): Under the effects of Trigger, Teruo's Quirk allows him to transform into a large eel-like creature with incredibly slimy skin.[3] Upon being kidnapped and modified, Teruo's arms and legs bulk up and Teruo can discharge a surge of electricity, which then causes him to pass out.[5]

Retrieved from "https://bokunoheroacademia.fandom.com/wiki/Teruo_Unagisawa?oldid=284023"
*Disclosure: Some of the links above are affiliate links, meaning, at no additional cost to you, Fandom will earn a commission if you click through and make a purchase. Community content is available under CC-BY-SA unless otherwise noted.