Start a Wiki
watch 02:15
'My Hero Academia' Profile: Tenya Iida
Do you like this video?

I'm a novice. I can't measure up to their standards! Be that as it may... I have to stand up! Never again! Never again will they... or my brother... leave me behind in the dust!
Tenya Iida about Izuku, Shoto and his brother in "Re-Ingenium"

Tenya Iida (, Īda Ten'ya?), also known as Ingenium (インゲニウム, Ingeniumu?), is the class representative of Class 1-A at U.A. High School, and is training there to become a Pro Hero. He is one of the main protagonists of My Hero Academia.

Tenya is a relatively tall and muscular young man with a wide frame. He has short dark blue hair, flattened neatly down and parted on the left of his head, a small patch completely shaved near the base of his head, and rather square eyes which match the notably pointed shape of his jaw. He usually wears a serious expression, and his eyebrows seem to be permanently pointed inwards, quite thin and long in length, the far ends sharply hooked inwards, and he wears glasses with rectangular lenses. Because of his Quirk, he possesses calves that are incredibly thick, and shaped like automobile engines, with three silver exhaust pipes protruding from each one.

His hero costume consists of a black one-piece suit with a high collar, over which he wears various pieces of armor, all a pale silver in color, including a chest plate, a metal collar around his neck and another around his upper arm, and metal vambraces that extend past his elbows, pointed at the ends. He wears a helmet covering his entire face, its sharp bevor full of holes to allow him to speak and breathe easily, and its upper piece rounded over his head with two larger holes on either side, two curved horns just behind and a single spike sticking out of the back of his head. On his feet, he wears silver knee-high boots with gold accessories, which are specialized for his Quirk, and around his torso, he has three thick metal pipes, attached with a blue band, although these only serve as decoration. His armor is very lightweight and does not protect him much; its main purpose is to cut down air resistance rather than to protect him.

Tenya in a formal suit.

Tenya in My Hero One's Justice. 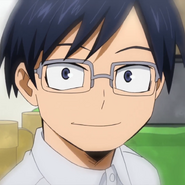 Tenya as a child.

Tenya may look severe, unfriendly and even intimidating at first glance, but he's actually a very straightforward, earnest, intelligent, sophisticated, disciplined and noble person, if not a bit clueless about personal interactions due to his elite upbringing. Thanks to his generally hyperactive and intense behavior, Tenya often exhibits plenty of peculiar tics, such as moving his arms around in strange patterns or sometimes twitching his own body uncontrollably, yet he rarely sheds away his usual strict expression.

Tenya tends to take everything very seriously and is known for his habit of jumping to conclusions, then enthusiastically speaking or acting based on said conclusions. For example, after assuming that Izuku Midoriya had figured out the true nature of the U.A. Entrance Exam (even though Izuku was only acting on a whim), Tenya started acknowledged him as a worthy peer and has since held him in high esteem. Furthermore, Tenya always attempts to immerse himself heavily into practical exercises, playing his part as a hero or villain in an overly theatrical manner, as an attempt to appear more authentic.

Tenya is extremely dedicated to his studies and is always eager to learn new things, regardless if they have anything to do with Heroics. As Class 1-A's representative, Tenya is obsessed with organization and discipline, expecting his classmates to follow suit, which more often than not annoys them due to his usually loud and overbearing nature. At the same time, Tenya takes personal responsibility for the safety and guidance of his classmates in times of crisis, considering it his duty as class representative to protect and keep them away from dangerous situations should they ever arise. Tenya knows how to quickly respond to situations of emergency, making sure to downplay panic and disorder among bystanders.

Tenya is very humble, willing to admit to his mistakes, apologize for rude behavior and improve himself in areas he is lacking. This became clear when Tenya admitted that seeking vengeance against Stain was not the way a real hero should act, and when he decided to leave his damaged left hand unhealed as a reminder of his recklessness while also as a motivation to pursue true heroism. Tenya values honor and fair play, becoming outraged if it turns out that he is being manipulated by more selfish personalities such as Mei Hatsume whom used him during their battle in the Sports Festival to promote her inventions.

Being part of the highly-esteemed Iida Family, Tenya is proud of his lineage and works hard to meet the expectations put on him. Tenya admires his older brother, Tensei Iida (also known as the Turbo Hero: Ingenium), and wants to become a hero similar to him. His bond with his brother is so strong that after Tensei was severely injured by Stain, Tenya sought to avenge him by trying to hunt and dispose of Stain himself, breaking several rules of Hero work in the process, which otherwise would be extremely uncharacteristic of him. Having inherited the alias of Ingenium, Tenya now works hard to be able to uphold his brother's Hero name as well as the reputation of the Iida Family.

Overall Abilities: Tenya has repeatedly shown that he is a highly formidable combatant. His skills earned him 4th place in the Quirk Apprehension Test, 6th place in the U.A. Entrance Exam, having the second-highest amount of villain points, and 4th place at the U.A. Sports Festival, although he qualified for 3rd place if he had stayed for the closing ceremony. Thanks to his Quirk, Tenya has been revered as one of the fastest students in Class 1-A, and he uses his increased speed to supplement his fighting style which involves powerful, high-speed kicks that can even crush metal. Using his incredible speed and quick reflexes, Tenya was able to defeat Ibara Shiozaki, one of the most formidable students in Class 1-B, and nearly defeat Shoto Todoroki, one of the strongest students in Class 1-A, but the latter blindsided Tenya by freezing his mufflers before encasing Tenya in ice. Shoto and Izuku, two of the most powerful students in their class, have both commented on Tenya's superior speed, and while Izuku has trained himself to keep up with Tenya, Shoto is unable to keep up with all of Tenya's high-speed movements.

When facing the Hero Killer: Stain, a powerful S-Rank villain who bested many pro heroes, which included Tenya's brother, Tensei, Tenya himself was so fueled with vengeance, he was almost killed by the Hero Killer. But after Izuku and Shoto arrived to help, Tenya discarded his desire for vengeance and was able to hold his own against Stain while working alongside his two classmates. During said bout, Tenya, with Shoto's help, was able to tap into a new Super Move, "Recipro Extend", in order to help successfully immobilize Stain. Following his run-in with the Hero Killer, Tenya is recognized as one of stronger students of Class 1-A, as noted by Pixie-Bob.[1] During the Joint Training Battle, Tenya, using the advice given to him by his older brother, was able to increase his speed to the point where he is much faster than Gran Torino, who’s revered as the fastest hero in the world. With his new speed combined with his fighting style, Tenya was able to overwhelm Juzo Honenuki, a recommended student, and force him into retreat.

Keen Intellect: Tenya was ranked 2nd place in the mid-terms, proving his tremendous academic prowess. He was able to discern that there were parameters of the U.A. Entrance Exam that he was unaware of. Tenya also has strategic and tactical abilities. When facing the Hero Killer: Stain, Tenya recalled how Shoto had frozen his mufflers during their battle at the U.A. Sports Festival and used it as a battle tactic to increase his speed even further in order to blindside Stain. When he was paired with Mashirao Ojiro to battle Power Loader in the Final Exams, Tenya came up with a strategy that involved carrying Mashirao on his back and using "Recipro Burst" in order to swiftly evade the traps Power Loader had set. When it seemed that the Pro Hero was about to defeat them, Tenya quickly thought of another plan, in which Mashirao wrapped his tail around Tenya’s leg, and Tenya himself used "Recipro Extend" to fling Mashirao to the escape gate, while the latter parried Power Loader's attack, quickly securing victory for the young heroes.

Engine (エンジン, Enjin?): Tenya's Quirk is that he has car-like engines in each of his calves, giving him super speed and extreme kicking power. Tenya needs to fuel his engines by drinking orange juice.

Tenya's engines have multiple gears; it is currently unknown how many, but it has been implied that their are more than three. Much like a real engine, his Quirk requires that the exhaust pipes on the backs of his legs remain clear of obstructions in order to function properly.

As part of his training, Tenya engaged in hardcore, long-distance running to increase his leg strength and stamina, so that he can run faster for longer periods of time. During the Quirk Apprehension Test, he ran 50 meters in 3.04 in Third Gear, meaning he ran 51.29 kilometers per hour (36.79 miles per hour).

Sometime before the Joint Training Arc his older brother Tensei told him about a secret family method regarding their Quirk. This prompted Tenya to remove the mufflers from his legs in order to grow new ones to withstand his training. This exhibits his capacity for pain and perseverance. His Recipro now lasts for 10 minutes, as opposed to ten seconds. However, he becomes so fast that he cannot control himself.

Hero Costume: Tenya's hero costume is an armored suit that supposedly decreases wind resistance but is actually mostly for decoration. Contrary to the appearance, his armor is lightweight.

Retrieved from "https://bokunoheroacademia.fandom.com/wiki/Tenya_Iida?oldid=241446"
*Disclosure: Some of the links above are affiliate links, meaning, at no additional cost to you, Fandom will earn a commission if you click through and make a purchase. Community content is available under CC-BY-SA unless otherwise noted.