'I have to get stronger quickly', you say. It's true. Time is not on your side—nor on your enemies'. And they won't wait for you to get stronger.
Sorahiko Torino to Izuku Midoriya in "Struggling"

Ever since the Hideout Raid Arc, despite being retired, he continued assisting the Police Force in investigating the League of Villains.

Gran Torino is an extremely short, elderly man with heavy wrinkles and a scrawny built. He had a light complexion and yellow eyes. His hair is grey and spikey, styled short with some bangs hanging forward and a trimmed beard.

His hero costume consists of a full-body monochrome[3] suit along with a yellow cape, a belt with the letter "G" on it, very thick yellow gloves and boots, and a dark domino mask which resembles two diamonds.[4]

In contrast with his now-extremely short and rather shriveled appearance, he is quite tall and handsome with a well-built physique in his younger days, having at least rivaled All Might's hero form in height. Gran Torino kept a similar appearance over his life down to his short grey hair; currently, he also wears a smaller version of the costume he wore in his younger years. 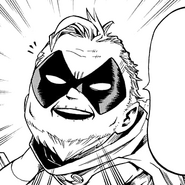 Gran Torino in the manga.

Initially, Gran Torino appeared to be a senile old man who constantly forgot and asked Izuku Midoriya's name, often calling him "Toshinori".[5] Even though he was the one who sent Izuku the internship offer, he would often fail to recall Izuku's name for more than a moment. In reality, this proves to be nothing more than a façade for messing with his newfound protégé.

Gran Torino is actually a very intelligent man with an incredibly broad perception. He proved to be a far more capable teacher to Izuku in a mere week than All Might did in almost a year. He was able to read Izuku's progress and personality, just by watching him at the U.A. Sports Festival and indirectly taught him the first step to mastering One For All with a simple parallel between Izuku and his favorite dessert (taiyaki).[6] His sharp mind is also evidenced when he was able to accurately predict All For One's strategy based solely on the media covering the aftermath of Hero Killer: Stain.[7]

As a mentor, Gran Torino appears to be very hard on his students. Every time All Might speaks about or to Gran Torino, he starts freaking out and shakes profusely because of his memories of their brutal training.[8][7] Gran Torino also never hesitates to yell, berate, or hit Izuku for his mistakes.[9][10][11] He also extends this to Toshinori who he reprimands for not visiting him on occasion and tells him to keep his focus when he fights his enemy All for One for the last time. Nevertheless, he does not hesitate to praise his students when they deserve it such as when he complimented Izuku for his gradual skill with his power and when he complimented All Might's victory over All For One.

Overall Abilities: Despite his old age, Gran Torino is a very powerful combatant. Gran Torino was the one who taught the world's number one hero All Might how to fight and use his Quirk. He is an excellent teacher and was wise enough to teach Izuku Midoriya on how to better use One For All as well.

Gran Torino was strong enough to defeat a low-tier Nomu with little aid from Endeavor, something several Pro Heroes could not manage to do. He was also capable of knocking out Dabi, Spinner, Magne, and Twice in an instant using single attacks. Gran Torino was also present at least two of the battles against All For One, and proved instrumental in helping All Might defeat the Symbol of Darkness in their rematch. Gran Torino was even able to defeat and arrest Kurogiri while fighting off Gigantomachia.

Keen Intellect: Gran Torino taught both All Might and Izuku how to use One For All, despite never possessing the Quirk himself. In just under two days, Gran Torino taught Izuku what All Might had been trying to teach him for almost a year. Gran Torino was able to give All Might solid advice on how to defeat All For One as well.

Jet (ジェット, Jetto?): Sorahiko's Quirk allows him to shoot jets of air from the holes on the soles of his feet. These air jets give him incredible speed and kicking power, as well as the ability to fly short distances quickly and with ease. The air he uses for his Quirk comes from his breathing.

Despite the flight capabilities his Quirk grants him, Gran Torino cannot propel himself too far into the sky, meaning that his ability is not unlimited despite its outward strength.

Holed Boots: Gran Torino wears boots with a number of holes through their soles. This allows him to use his Quirk without his footwear getting in the way.

Retrieved from "https://bokunoheroacademia.fandom.com/wiki/Sorahiko_Torino?oldid=299819"
*Disclosure: Some of the links above are affiliate links, meaning, at no additional cost to you, Fandom will earn a commission if you click through and make a purchase. Community content is available under CC-BY-SA unless otherwise noted.