Slide and Glide (, Kassō?) is the Quirk used by Koichi Haimawari.

Slide and Glide allows the user to project a repulsive force from their hands and feet.[1][2]

The user can slide across surfaces by lightly repelling themselves away from the surface. The sliding gives the user great speed, initially allowing the user to travel as fast as a bike,[1] though Koichi has since proven to be able to move at speeds similar to a speeding bus.[3] Slide and Glide can be used to slide up the side of a building.[4] Slide and Glide can also be used to go backwards and side to side and to rotate.[5]

Koichi has also learned to cling to surfaces by repelling his hands and feet toward the surface.[2]

After being repeatedly punished for floating,[6] Koichi's control of his Quirk weakened and he needed to contact a surface in at least three places before he could slide across it.[1] It is also capable of limited flight which Koichi's strict mother had beat out of him at a young age, until upon rescuing Makoto Tsukauchi did he remember.

Koichi has stated that this Quirk can make him move far faster than a bike, but doing so is dangerous, as he has no brakes, and his power does not prevent him from taking damage from his Quirk. However, after receiving advice from Tensei Iida, Koichi learns to brake by accelerating in the opposite direction.[5] His top speed is yet to be known. 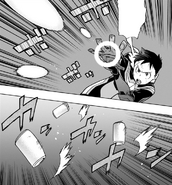 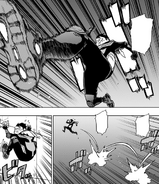 Retrieved from "https://bokunoheroacademia.fandom.com/wiki/Slide_and_Glide?oldid=286443"
*Disclosure: Some of the links above are affiliate links, meaning, at no additional cost to you, Fandom will earn a commission if you click through and make a purchase. Community content is available under CC-BY-SA unless otherwise noted.