All those burnt corpses that've turning up here and there lately... You ever stop to think about the families who gotta live with that loss?!
Sajin Higawara to Dabi in "Expressway"

Sajin Higawara (, Higawara Sajin?),[2] also known as Sand Hero: Snatch (サンドヒーロー スナッチ, Sando Hīrō Sunatchi?), was a Pro Hero and a bodyguard for the Police Force. Snatch fought the League of Villains after they ambushed the escort of Kai Chisaki but in spite of his efforts he was killed by the villains.[4]

Sajin was a rather muscular man with a long mustache. He wore a mask that left some of his hair hanging out, with the addition of a long ponytail. He appeared to wear a combat vest of sorts with tubes connected to his back. His upper body was always shown to be formed in sand, mainly his arms. 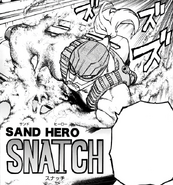 Snatch's appearance in the manga.

As a hero, Sajin seemed to care much about the feelings of crime victims, such as families of murdered people. Even while facing villains, he did not hesitate to put his battle aside and rescue the officers transporting Kai Chisaki from crashing their van.[4]

After the Shie Hassaikai are defeated by the Heroes, they are escorted by special police vehicles to the Villain Hospital in Takodana. Tomura Shigaraki, along with several other villains, arrive at the police convoy to get revenge on Overhaul and his Yakuza.

Snatch is present in one of the police cars to act as a bodyguard and quickly emerges to fight the villains after his car is attacked by Dabi. He protects the car and taunts the League of Villains, to which Tomura responds by jumping off of their own vehicle, and attempting to use his Quirk on Snatch, only to fail because of Snatch's immunity to Decay. Snatch attempts to restrain Tomura but is intercepted by Atsuhiro Sako's Quirk, which throws the police car into the air.

Snatch then safely lands on the road, carrying the policeman that operated the car. After this, he is confronted by Dabi. He deduces that Dabi is the mass murderer that made news recently, based on his Quirk, and when Dabi shows joy of his infamy, Snatch scolds him for not caring about the feelings of the victims' families. He tries to attack Dabi with a sand creature but is quickly engulfed in Dabi's blue flames and compressed into a ball along with the fire, which kills the hero since he can only transform his upper body.[4]

Endeavor brought up Snatch's death to Dabi, who didn't recall the hero's name before the latter attacked, but Dabi retreated after Mirko showed up. While walking, Dabi then recalled who Snatch was from the attack on the police escort and the impact of what he said to Dabi.[5]

Sandstorm: Sajin's Quirk allowed him to transform the upper half of his body into sand. He was able to control this sand with his mind, and increase the amount of it. He could even manipulate the sand into constructs, such as a lion.[4]

He was noted to have immunity to Tomura's Quirk, as his body became countless grains of sand, and Tomura's Quirk required him to touch something with all five fingers in order to disintegrate it. The transformed parts are also resistant to fire, as Dabi's flames had no effect on him.[4]

Retrieved from "https://bokunoheroacademia.fandom.com/wiki/Sajin_Higawara?oldid=283980"
*Disclosure: Some of the links above are affiliate links, meaning, at no additional cost to you, Fandom will earn a commission if you click through and make a purchase. Community content is available under CC-BY-SA unless otherwise noted.