This article is about the Eight Bullets' member of the Shie Hassaikai. For the Meta Liberation Army Grand Commander known as "Re-Destro", see Rikiya Yotsubashi.

Rikiya Katsukame (, Katsukame Rikiya?)[1] is one of the Eight Bullets who works under Overhaul for Shie Hassaikai.[2]

Rikiya is a huge, tall, and very muscular man.

He wears a black tank-top with jeans and sneakers, as well as a plague mask that covers his head. He also wears massive gauntlets and knuckledusters on his fists too. 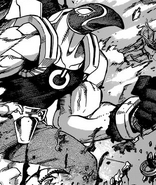 Rikiya in the manga.

Rikiya fused with Kai into a Kaiju.

Rikiya seems to require energy to move effectively, as when he charged through the gate at the beginning of the raid, he complained about how it was too early for stuff to happen. After he was temporarily captured and absorbed the energy of people around him, he declared he 'felt like a new man'.

In general, it seems Rikiya enjoys absorbing energy from others, which may simply be a byproduct of his Quirk or indicate that Rikiya is normally rather lazy. He also demonstrates a slightly perverted side during his battle against Nejire Hado where he suggestively moved his hands at the idea of touching her after his Trigger worn out.

Little is known about his past but at some point, Overhaul recruited him into the Shie Hassaikai.

When the Raid Team, consisting of Pro Heroes and Police Force, was about to enter the Yakuza stronghold. Rikiya broke through the front gate and began to attack them.

Rikiya fought Ryukyu, along with her interns, Nejire Chan, Uravity, and Froppy. He was defeated and restrained.

He escaped, using a Trigger on his Quirk, and absorbed the vitality from the police and heroes to become stronger and break the bindings and continue fighting. Himiko Toga in the form of Deku tricks the heroes into sending Rikiya crashing down to the underground tunnel where his boss is fighting. He fuses together with Overhaul, becoming a monstrous amalgam of flesh to fight Deku. After an intense battle, Eri uses her Quirk to defuse him from Overhaul and he is arrested along with the rest of the Hassaikai.[3]

Overall Abilities: Being an Eight Bullets member of the Shie Hassaikai, Rikiya is a very formidable individual. While he commonly overwhelms his opponents with his enormous size and brute strength, Rikiya also uses his Quirk, Vitality Stealing, to absorb the stamina of his adversaries, simultaneously strengthening himself and weakening his opponents. Rikiya's overall capabilities make him a rather dangerous combatant who can singlehandedly contend with foes that outnumber him.

During the Shie Hassaikai Raid, Rikiya was the first line of defense to take on the raiding team of police officers and Pro Heroes. After incapacitating 2 police officers, he faced off against Ryukyu, at the time No. 9 Pro Hero, Nejire Hado of U.A.'s Big 3, Tsuyu Asui, and Ochaco Uraraka, who managed to eventually subdue the Eight Bullets member. While detained however, Rikiya's Quirk automatically activated, revealing that, prior to his battle against the Ryukyu Squad, Rikiya had taken a dose of the Quirk-enhancing drug, Trigger.

Under the effects of Trigger, Rikiya can absorb the vitality of nearby people through inhalation alone, without having to make physical contact with them. With this boost in power, Rikiya regained consciousness, reinvigorated, broke free from his restraints, and was able to fight against the Ryukyu Squad better than he did compared to the beginning of their bout for 20 minutes, especially since Nejire, Tsuyu, and Ochaco were stamina-drained due to Rikiya's Quirk. It was only when the effects of the Trigger drug wore off that Rikiya was defeated by the weakened Ryukyu Squad's final, combined assault.

Vitality Stealing (, Katsuryoku Kyūshū?): Rikiya's Quirk allows him to siphon away other people's stamina by inhaling their strength away from them. He can use the stolen stamina to greatly increase his own size and strength. In order to use his Quirk, Rikiya needs to be touching the target.

When enhanced by Trigger, Rikiya does not have to be touching his target.[1]

Rikiya's stats, according to the Ultra Analysis Book

Metal Gloves: Rikiya wears a pair of metal gloves on his hands to augment his punches.

Trigger: Rikiya uses this drug to enhance his Quirk so he can siphon people's stamina without needing to touch the victims.

They have not been seen interacting with each other, but it can be assumed that Rikiya is just as loyal to Overhaul as much as the rest of the Eight Bullets.

Retrieved from "https://bokunoheroacademia.fandom.com/wiki/Rikiya_Katsukame?oldid=283970"
*Disclosure: Some of the links above are affiliate links, meaning, at no additional cost to you, Fandom will earn a commission if you click through and make a purchase. Community content is available under CC-BY-SA unless otherwise noted.