She is an elderly looking woman. At the announcement for the Hero Billboard Chart JP she had her shoulder length hair slicked back and was wearing a dark suit. 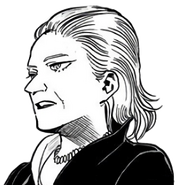 The Commission President in the manga.

Not much is known about her personality at this point.

The President is first seen announcing the new standings of the Hero Billboard Chart JP in the aftermath of All Might's retirement. She says the Commission chose to hold a ceremony for the standings despite that because they judged it to be a turning point and that the individuals who could become icons for the public were all present in that room. With this she concluded her speech and had the Pro Heroes on the Top 10 of the Billboard rankings give speeches of their own.[1]

Retrieved from "https://bokunoheroacademia.fandom.com/wiki/Public_Safety_Commission_President?oldid=260991"
*Disclosure: Some of the links above are affiliate links, meaning, at no additional cost to you, Fandom will earn a commission if you click through and make a purchase. Community content is available under CC-BY-SA unless otherwise noted.