This article is about the Quirk. For the Quirk's user, see Kai Chisaki.

Overhaul (オーバーホール, Ōbāhōru?) is the Quirk used by Kai Chisaki.

Overhaul gives Kai the ability to disassemble and then reassemble anything he touches with his bare hands.

Once Kai takes a target apart, he has the options of either leaving it destroyed, restoring it to its original form or shaping it into something new. This process happens instantly and is effective on living and non-living things alike. [1] Kai just needs one finger to make contact with something for his Quirk to activate, with the choice of whether Overhaul should affect only one select part of his target or its entirety being left solely to Kai's wishes.[2]

Kai is capable of deconstructing matter and reconstructing it into shapes favorable to himself and hostile to his enemies. When activating Overhaul on an entire area, the deconstruction and reconstruction phases both happen extremely fast. Kai is able to form holes, walls, spikes, and platforms anywhere in his surroundings from a single point.[3] This tactic, however, loses effectiveness in fractured terrain, where the ground is split into disconnected pieces instead of whole.

Kai can recombine two different objects or beings into a single entity that possesses components of both subjects (including Quirks). He performs this by holding both elements he wants to merge with each separate hand.[4] It's possible for a combined entity to further transform as well, as long as Kai merges it with additional objects.

When Kai decides to utilize Overhaul on a person, he can heal any injuries or ailments they once had by reconstructing them to a biologically perfect state. This grants Kai a way to cure his and his allies' wounds during battle, although he has noted that the deconstruction phase is very painful.[5]

Overhaul can be restrained if Kai becomes unable to utilize his arms. After Atsuhiro Sako and Tomura Shigaraki destroyed his arms, which are also his Quirk Factor(s), Kai is now unable to activate his Quirk.

Kai's main usage of Overhaul outside of battle was obtaining DNA samples from Eri, which was realized by destroying her body, collecting some of her remains and reassembling her back to life. Because Eri had access to a Rewind Quirk, Kai was able to experiment on her blood, transforming it into an ingredient for a special drug that could reverse a target's Quirk Factor, turning them Quirkless.[6]

Following the Yakuza tradition of covering the trails of their crimes, Kai cleaned up his illegal actions by disassembling his targets first, taking what he needed from them and restoring their bodies to perfect condition in the end, thus avoiding incriminating evidence of violent assault from being left behind.[1] This same tactic was employed by Kai to recruit members to his organization.[7]

In battle, Kai focuses on quickly dissembling his targets to kill them or reshaping his terrain into a barrage of spikes. He may reshape the ground to maneuver himself around and block incoming attacks. This ability to instantly rearrange his vicinity gives Kai several methods of dealing with an opponent, making him a massive threat from any range.[3]

After overhauling himself and Shin Nemoto, Kai revamped his own body into a monstrous form, who had access to both this Quirk as well as Shin's. This transformation granted Kai increased power, speed and an extra set of arms for him to activate his Quirk through.[4] He would later repeat this tactic with Rikiya Katsukame, taking advantage of his grown body to increase his abilities even further.[8]

As Kai suffers from mysophobia, the resulting gore that's sometimes left by his Quirk's deconstructing process might trigger a nervous reaction from him if it ends up spilling on his body or clothing. 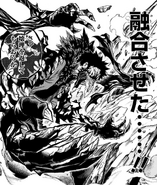 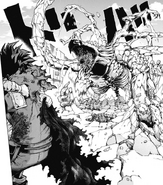 Retrieved from "https://bokunoheroacademia.fandom.com/wiki/Overhaul_(Quirk)?oldid=223208"
*Disclosure: Some of the links above are affiliate links, meaning, at no additional cost to you, Fandom will earn a commission if you click through and make a purchase. Community content is available under CC-BY-SA unless otherwise noted.