Keep calm, carry on and don't freeze up. Even when you screw up, just keep smiling like usual... That's my M.O..
Oboro Shirakumo to Shota Aizawa in "Two as One"

Oboro Shirakumo (, Shirakumo Oboro?), also known as Loud Cloud (ラウドクラウド, Raudo Kuraudo?) was a student in Class 2-A at U.A. High School training to become a Pro Hero. He was in the same class as Shota Aizawa and Hizashi Yamada. He was killed during a battle with a villain during his Hero Work-Studies.

His corpse was recovered by All For One and transformed into a Nomu called Kurogiri to act as Tomura Shigaraki's caretaker.

Oboro was a tall boy of average stature with light blue, wavy hair that was swept back to flow upwards above his head, two shorter, ear-length tufts left hanging downwards to frame his face. He usually wore an expression of excitement, possessing a large, teeth-bearing grin and semicircular, inward-tilting blue eyes that were often squeezed shut.

At U.A., he wore the standard male uniform: a light gray blazer with dark turquoise trimmings over a white dress shirt and dress pants, along with a red tie, as well as a small rectangular bandage over his nose.[1]

Oboro's hero costume consisted of a closed dark blue martial arts Gi, secured by a black knot-tied obi over his waist, boots, and black fingerless gloves. He also wore a black undershirt and a dark brown aviator jacket with white fur lining, and, on his head, a blue aviator hat with large mufflers and an opening that allowed his hair to protrude from the top. The back of his jacket featured the Japanese word for "cloud" (雲, kumo?). He sported goggles, and on his back, he carried a sheath to store his quarterstaff. His suit was complemented by a gourd-like speaker tied to his belt.[2] 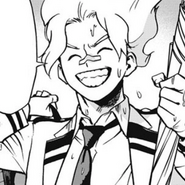 Oboro in his uniform. 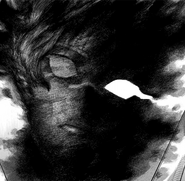 Oboro was a boy with a jovial and casual personality, very prone to making jokes and witty comments with innuendos. His energetic and goofy persona was similar to that of his classmate Hizashi Yamada, although Oboro never quite reached his excitement level.

Due to his extravagant behavior, he wasn't big on following protocol and had little to no sense of shame, as evidenced when he came into class through a window and changed his clothes in front of everyone, regardless of whether this might bother other people. He didn't give much importance to his criticisms or reprimands.

Despite this, the most characteristic element of his personality is his selfless altruism. Oboro was the type of person to go the extra mile when someone or something needed help.

Cloud (, Kuraudo?): Oboro's Quirk grants him the ability to generate clouds. These clouds are dense enough to be touched and can carry a relatively large amount of weight. Oboro can ride his generated clouds through the air and even use them to store objects.[1]

Quarterstaff: When he wears his hero costume, Oboro fights using a quarterstaff, which he handles with great skill.

Gourd: Oboro carries with him a gourd that is actually a device that works as a speaker.

Retrieved from "https://bokunoheroacademia.fandom.com/wiki/Oboro_Shirakumo?oldid=299500"
*Disclosure: Some of the links above are affiliate links, meaning, at no additional cost to you, Fandom will earn a commission if you click through and make a purchase. Community content is available under CC-BY-SA unless otherwise noted.