Number 6,[1] also known as Rokuro Nomura ( Nomura Rokurō)[2] or the Scarred Man,[3] is a member of the Villain Factory and the primary antagonist of My Hero Academia Vigilantes. He is also a Pro Hero under the alias Rock (ロック Rokku).[4] or High-Speed Hero II: O'Clock II (超速ヒーロー" オクロック, Chōsoku Hīrō Okurokku Tsū?)[5]

Number 6 is a young man with a fairly athletic physique, long black hair gathered in a ponytail, and a perpetual smirk on his face. His most distinctive feature is a long scar that goes diagonally across his face and over his nose, which he gave to himself as a homage to O'Clock.[6]

When allowing Bomber cells to merge with his arms, or using Overclock to regrow an arm out of Bomber cells, the respective arm became the same color as that of the Bombers' bodies, with growths appearing on them as well as miniature Bomber faces.[7]

Number 6 has a great ability to disguise, being able to pass himself off as another person. His facial features change to become indistinguishable from his normal ones, being able to even hide his characteristic scar perfectly. When his deception is discovered or just when he decide to stop his charade, he immediately reverts to normal.[8][9]

In his hero costume, he wears a costume similar to O'Clock, with a trench-coat and black hat. 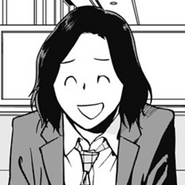 In general, Number 6 has a confident and self-assured attitude, keeping calm in any situation, even when he is confronted with a gun. He prefers to avoid confrontation at all times, choosing to flee rather than fight, but he has no problem with using violence when the situation calls for it. He also has no qualms with endangering the lives of innocent people as a distraction or for his investigations with the Next-Level Villains.

He can be quite vengeful, as seen when the police wound him with rubber bullets. Instead of running away, he chooses use his Quirk to take their pistols and shoot them with their own rubber bullets. He doesn’t aim to kill, rather he decides to shoot them only to seriously injure them, although he doesn’t worry about the possibility that some of them could die afterwards due to injuries. This could mean that he doesn’t like to get blood on his hands directly, but otherwise doesn’t care much about collateral damage.

Number 6 also proves to have a certain level of self-centeredness and narcissism, having things that get him out of his composure and cool. One of them is when he is injured in the face, even receiving the slightest scratch from a foe drive him into a murderous rage. He holds the scar of his face with extreme pride, and thinks that another wound may ruin his looks and distract from his self-inflicted "cool, character-defining scar".[10]

The other thing that makes him very angry is seeing his plans fail. This could be verified when the heroes repel his Bombers in the attack on the Tokyo Sky Egg. Being unable to tolerate seeing his enemies triumphing, he has one of his creatures self-destruct, destroying the supporting tower to cause the Sky Egg to collapse, which would kill thousands of people. In other words, he would kill a lot of people with no remorse on a temper tantrum.[11]

Despite this, when Number 6 uses his skills for disguise and infiltration, he is perfectly capable of acting as a totally different person, hiding his true colors and intentions, deceiving others. For example, when he is "Rokuro Nomura", he acts as the clumsy but well-meaning and polite Marukane Performers's manager, without anyone suspecting that there is anything weird about him.[12]

Body Modifications: Number 6 has been modified by the Villain Factory to possess enhanced physical and mental capabilities.

Disguise: Number 6 appears to be able to disguise himself as when pretending to work as a part-timer for Kanidoge or as the new manager for the Marukane Performers. [13][14]

Enhanced Durability: Number 6 was able to withstand falling three floors while unable to land safely due to his legs having been shot, having his face mauled by Knuckleduster, and then a point-blank detonation which blew off one of his arms.[7]

Overclock (オーバークロック, Ōbākurokku?): Given to him by All For One, Number 6's Quirk gives him the power to accelerate his perception of time to extreme speeds to the point that, to him, it looks like everything is standing still, allowing him to see, hear, and think at hyper-speed. It also increases his physical speed as a result.

His speed allows him to deliver as many as eight blows in an instant, though by pushing himself past his limit, he is fast enough to deliver more punches, though hurting himself in the process.

He can also utilize Overclock to accelerate cell growth, allowing him to regrow his arms and the Bomber parasites which inhabit his body.[7]

In order to be used without "brain drain", the Quirk must be given a cool-down time of ten seconds.[1]

Self-Detonation: Thanks to having Bomber cells parasitically inhabiting him, Number 6's second Quirk allows him to make the parts of his body self-destruct. Using this Quirk destroys the body part, but thanks to his body-modifications, he is able to regenerate.[7]

Retrieved from "https://bokunoheroacademia.fandom.com/wiki/Number_6?oldid=275954"
*Disclosure: Some of the links above are affiliate links, meaning, at no additional cost to you, Fandom will earn a commission if you click through and make a purchase. Community content is available under CC-BY-SA unless otherwise noted.