Season 4 of My Hero Academia anime was announced in the 44th issue of the 2018 Weekly Shonen Jump magazine, and will begin airing in Japan on October 2019. A direct sequel to Season 3, this season will continue covering the Shie Hassaikai Arc.

As had been done previously, this season was first confirmed to be in the works at the end of the final episode of season three, which had aired days before the Shonen Jump issue containing the announcement was released.[2] On December 19, 2018, it was announced that it will premiere on October 2019.[1]

On May 26, 2019, the Japanese music label Legendoor announced that Yuki Hayashi had returned to compose the soundtrack for this season.[3] Hayashi would later confirm this himself on social media just one week later.[4]

On June 6, 2019, Funimation announced that it had acquired the season for international streaming through it's FunimationNow service. [5] 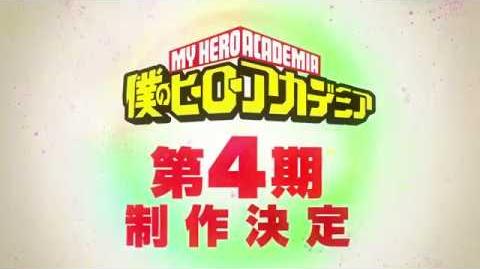 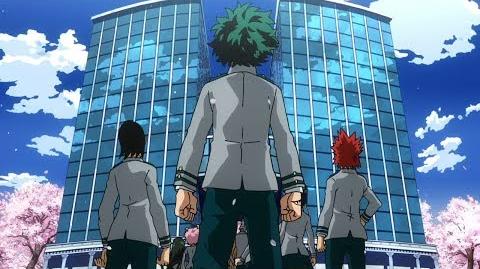 『僕のヒーローアカデミア』（ヒロアカ）TVアニメ第4期PV第1弾
The first promotional video for the fourth season.
Add a photo to this gallery

Retrieved from "https://bokunoheroacademia.fandom.com/wiki/My_Hero_Academia_Season_4?oldid=187225"
*Disclosure: Some of the links above are affiliate links, meaning, at no additional cost to you, Fandom will earn a commission if you click through and make a purchase. Community content is available under CC-BY-SA unless otherwise noted.