Save! Rescue Training (救え!救助訓練!, Sukue! Kyūjo Kunren!?) is a Jump Festa 2016 special episode and the first OVA for the My Hero Academia series.

Shota Aizawa reads a report describing the League of Villains' attack on the U.S.J. He details certain things that happened, such as the villains using Kurogiri's Warp Gate to separate students into various locations within the U.S.J. and All Might's win against the Nomu. Shota finishes the report by apologizing to the families of the Class 1-A students.

Class 1-A returns to the U.S.J. four weeks after the attack took place. Shota and Thirteen have recovered enough to return to their teaching duty, and tell the class that they are to start rescue training, although Ochaco Uraraka inquires about their health. Izuku Midoriya asks Shota about All Might, who is also due to meet them at the U.S.J., but Shota coldly tells Izuku to forget about him.

The first rescue operation involves three students trapped at the bottom of a chasm. Each of the students has a different need of attention - one is unconscious, one has a broken leg, and one is very frightened. Denki Kaminari and Eijiro Kirishima comment on the depth of the chasm, but Tenya Iida rushes to the chasm edge to shout encouragement down below. Thirteen interrupts Izuku's monologue about using his power to save others to tell him, Ochaco and Tenya that they will be the students in need of rescue. With the three students at the bottom of the chasm, Shota tells Shoto Todoroki, Momo Yaoyorozu, Fumikage Tokoyami and Katsuki Bakugo that they will be performing the rescue with a limited amount of equipment.

Katsuki explodes in anger at the prospect of him rescuing Izuku and questions Shota, whilst Tsuyu Asui explains it is this way because they are in an Anime Festa special episode. Tenya screams from the chasm for help, and as Shoto says they must start the rescue, Katsuki suggests to blow the cliffside away so they can just scramble down the rubble to rescue them. Momo is shocked at his idea and Shoto simply ignores it, suggesting a much more reasonable plan for Momo to make a pulley to lower Fumikage into the chasm to rescue the unconscious student first. Momo breaks up Katsuki and Shoto's subsequent argument and yells down affirmation to the trapped students that help is on the way, and says that the first thing that must be done is to reassure the victims. Eijiro mutters that Momo is good at what she is doing.

Fumikage rappels down the chasm, supported by Shoto and Katsuki who anchor his rope. When he reaches the bottom of the chasm, Tenya excitedly screams at Ochaco that they will be saved, making her laugh as she pretends to be unconscious. Fumikage uses Dark Shadow to take Ochaco back up to the top of the cliffside in a stretcher. Izuku is amazed at Dark Shadow's versatility, making Fumikage flustered with his platitudes. As Ochaco reaches the top, Momo asks why she is laughing, and tells her that Tenya's role as a frightened victim is important and not a laughing matter. Thirteen commends Katsuki on realizing his Quirk cannot be used to help, and thus helping as a "normal" person.

The students switch around roles and in the last training session, Ochaco ties a splint around Tsuyu's "broken" leg. She then uses her Quirk to levitate Tsuyu out of the chasm and drops her into Izuku's arms; Izuku holds her for an awkwardly long period of time until a blushing Tsuyu asks to be let down because it's embarrassing. As the last rescue concludes, Yuga Aoyama, Koji Koda, Rikido Sato and Mezo Shoji discuss how they were not included in this part of the training.

The class now moves to the urban area of the U.S.J. for the next part of the rescue training, which involves students in need of rescue scattered in unknown locations in unknown conditions. Four of the students are rescuers, and of the 16 remaining who will play victims and find a place to hide, eight may not speak. Thirteen selects Izuku, Ochaco, Katsuki and Minoru Mineta as the rescuers. Katsuki once again explodes at the prospect of participating with Deku, and is reminded again that he is in an Anime Festa special, this time by Ochaco. Minoru wonders if he will be able to grope his fellow students under the guise of carrying them, after which Izuku forbids him from carrying anyone.

As the training starts, Katsuki blows himself away from the starting area in search of the victims. The remaining three agree to split up and search for the victims who are able to speak. Sitting in hiding, Shoto briefly laments on his childhood. A large villain suddenly emerges from the rubble underneath him, telling him that his facial expression is not that of a Hero. Shoto uses an ice attack against the villain, but not before the villain appears behind him and subdues him in one strike. Minoru and Izuku find Mashirao Ojiro, and construct a ladder with debris and Minoru's sticky spheres to help him out of his hiding place. Ochaco finds Kyoka Jiro who was hidden underneath a car. Tenya comes running at the pair, alerting them to the approaching villain. The villain appears, holding Shoto in one hand by his vest, and other students arrive at the scene.

Mashirao runs to Shota and Thirteen for help, but they say they are too injured to fight, and Thirteen urges the students to run to the exit. The villain creates a large circular clearing within the urban area in a singular stomp to the ground, effectively trapping the students. Katsuki runs into the clearing to fight the villain, and eventually lands a solid hit on the villain's back, pushing him forward. Katsuki tells Tenya to tell the rest of the class to run away, calling them weaklings. In response, the entire class shows their determination to fight. The villain creates a tornado of boulders, which are quickly destroyed by Yuga, Eijiro and Rikido. Kyoka, Hanta Sero and Momo restrain the villain, as the remainder of the class run at him. As the students approach, the villain breaks free and pushes all of them back.

Katsuki launches a surprise attack, but the villain easily holds him back. Izuku tells a few classmates about a plan he has concocted, and has Ochaco levitate him and Tsuyu launch him towards the villain with her tongue. Ochaco releases Izuku just as he uses one of Minoru's sticky spheres to pick up Shoto out of the villain's grasp. Izuku launches a flick attack at the villain, and stuns him long enough for Katsuki to launch a full power explosion, propelling the villain onto a rock covered in Minoru's sticky spheres, entrapping him. As Katsuki approaches to deal the final blow, the villain takes off his mask - revealing himself to be All Might in disguise.

The students yell at All Might, telling him that he went overboard. Before the rescue training began, All Might told Shota that he wanted to add a surprise to the training, and Shota replied that he was against the idea because the students had just experienced a villain attack. All Might eventually convinced Shota to let him add the surprise, but that it was to be his responsibility. As the students berate All Might which included Denki, Eijiro and Hanta beating the immobilized All Might to the point of him crying, Shoto apologizes to Izuku and Katsuki for being part of the surprise, having not been subdued by All Might but asked to play along instead. The students continue to berate All Might after he shows thanks to Izuku for restraining his upset towards him, and Shoto walks away, looking at his vest on the floor. 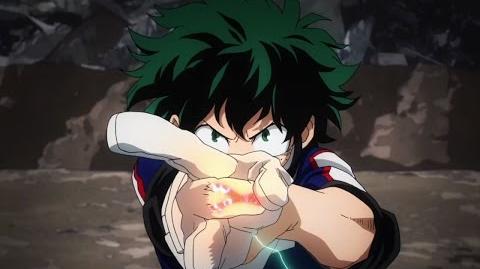 Retrieved from "https://bokunoheroacademia.fandom.com/wiki/My_Hero_Academia_-_Save!_Rescue_Training?oldid=203201"
Community content is available under CC-BY-SA unless otherwise noted.