After establishing the headquarters, the class performs various tasks: Denki is called to charge up a farmer's tractor battery; Koji retrieves lost pets; Tenya goes to assist an old lady who had a broken back to the hospital; Fumikage patrols the skies above Nabu Island; Mashirao, Shoto, Minoru, Tsuyu, Rikido, Mezo, and Hanta monitor the popular tourist beach area; Yuga and Mina clearing a highway road blocked by boulders; Eijiro helping a fisherman and his family load up on a semi-truck; Momo fixing a scooter; and Ochaco, Kyoka, and Izuku locating a lost kid.

Later on the night, Izuku was taking a fast jog to keep training on his Quirk: One For All, and stumbles upon Katsuki who was taking his night patrol. Katsuki and Izuku had a short conversation before they were interrupted by Katsuma who informs them about a villain closeby.

Back in the mainland, Katsuma and Mahoro's father, who was out-of-town for work, watches a video recording of his children before he was attacked by Chimera who slammed the truck to knock him out. Nine uses his Quirk to scan and see what kind of Quirks other people and found what he needed. He then uses his All For One Quirk to steal and absorb the father's Cell Activation Quirk. He tries to use his original Quirk: Weather Manipulation, but he feels strained because the father's quirk requires a Blood Type-A, so Nine theorizes that his children would be the key to his powers.

At Nabu Island, Katsuki and Izuku rushed over to where Katsuma said the villain is located: at the ancient castle ruins located southwest in a peninsula. Katsuki arrives on scene first to confront the villain: a giant praying mantis. He first used Stun Grenade to blind it, but he notices something wrong.

Izuku arrives shortly afterward and saw the praying mantis prepared to attack Katsuki, but it phases through him revealing to be a hologram created by Mahoro's Quirk: Hologram. Katsuki angrily scolds Mahoro and Katsuma for making the illusion before Izuku stops him.

Back on the mainland, the No. 2 Hero, Hawks, arrives on the scene of destruction and finds Katsuma and Mahoro's father unconscious after getting his Quirk stolen, a distraction created by Nine to divert the authorities from locating their position and their true objectives. While Hawks investigates the scene, the leader of the League of Villains, Tomura Shigaraki, observes from a skyscraper. 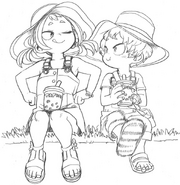 Retrieved from "https://bokunoheroacademia.fandom.com/wiki/My_Hero_Academia:_Heroes:_Rising?oldid=239471"
*Disclosure: Some of the links above are affiliate links, meaning, at no additional cost to you, Fandom will earn a commission if you click through and make a purchase. Community content is available under CC-BY-SA unless otherwise noted.