Together with her sister, Yu, Miu (, Miu?) makes up the underground idol duo, Feathers, that was called to perform at the Marukane Department Store Live Event.

Miu is a young girl of short stature with straight, shoulder-length light hair, worn up in a high ponytail on the left side of her head with a straight side fringe falling above her right eye. She has stern, dark eyes that sometimes appear to tilt slightly inwards, giving her a more aggressive appearance than her twin.

Miu's idol costume is identical to Yu's in design, consisting of a knee-length, sleeveless dress with a pointed skirt and a thick collar around her shoulders, a large feather decorating it to one side, tights, and one long glove covering her arm. What sets them apart is the fact that Miu's costume is designed to be the mirror image of Yu's, as its design faces the left where Yu's faces the right, and that the colors are also flipped, as the bodice of Miu's dress is paler and the skirt darker than that of Yu.

When forming the FeatherHATS with Pop☆Step, East Naruhata High Dance Squad and the Mad Hatters, Miu also wears a small tophat on the right of her head, a small feather poking out of one side. During training, Miu wears a plain tracksuit with pale lines running down the sides of her arms and legs.

After the timeskip, Miu let the pigtail grow, now being much longer than his sister's and ending in a ringlet. Unlike her sister Yu, Miu doesn't wear glasses. 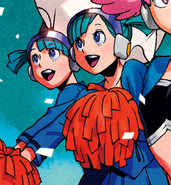 As having been fitting labelled "the mean one" by Makoto Tsukauchi suggests, Miu is very judgmental and can be a lot more rude than her sister, Yu. When first introduced, she's seen gossiping about and belittling Pop☆Step much more harshly than her twin, although, as she befriends and becomes closer with the Vigilante idol, this mean outlook towards her does change.

As preparation for the Naruhata Festival begins, Makoto brings in Miu and Yu to meet the idol who they'll be performing with, Pop☆Step. After giving a brief introduction, the twins immediately begin gossiping about the Vigilante idol and her sense of fashion.

After the East Naruhata High Dance Squad and Mad Hatters arrive, Makoto begins to plan how the groups will be presented on stage. She says that there shouldn't be any problems with the Dance Squad and Mad Hatters, but wonders how to present Pop☆Step and Feathers on stage, since Pop☆Step being in the middle would be the best visual balance but the worst vocal balance, according to Miu and Yu. Makoto agrees, but goes on to state that Pop☆Step definitely has the edge when it comes to stage presence, since Feathers haven't performed in as large of venues as she has. She decides to put the issue on hold and tells Feathers to practice some training drills with the Dance Squad for the time being.

However, during Feathers' training, Miu sprained her ankle, rendering her unable to dance around on stage as it was hoped she'd be able to. Makoto suggests that, if they can't make do, Miu could always be taken out of the performance and Pop☆Step and Yu could perform a duet, to which Miu cries out that she practiced so hard and didn't want to be taken out of the Narufest. After seeing the idol's upset, Pop☆Step says that Miu could always be placed in the center of the stage if her twin, Pop☆Step and the Dance Squad put it enough effort to draw the crowd's attention away from her lack of movement. She smiles at the girls and says that they both need to be there, since they have such talent at singing, and telling them that they should each do that they can.[1]

The day of the Narufest finally arrives, and, after the afternoon portion finishes, Miu and the rest of the performers prepare to go on stage.[2] However, thanks to Teruo Unagisawa, the venue's power suddenly cuts out, leaving it in total darkness and bewildering both the audience and the performers. Captain Celebrity arrives at the venue as he heard they'd been having trouble, and Makoto immediately explains the situation and sends him away to fetch the backup generators. Until Captain Celebrity arrives back and resolves the technical issue, however, the Narufest is deemed on standby.

Just then, Koichi Haimawari arrives back at the venue with Pop☆Step's portable microphone, and the Vigilante idol is encouraged by her fellow performers to go on stage and entertain the crowd until the generators arrive. Miu and Yu wish her luck as she heads on stage,[3] and, after a few minutes of her ad-libbing to charm the crowd, the twins smile and remark that, as lame as she was, she was actually kind of cute.[4]

The power is finally turned back on, and Miu takes to the stage with the rest of the performers to perform their remix of the Marukane Department Store jingle, which the crowd greatly enjoys.[5] After the song ends, the crowd goes wild and Miu and Yu are seen hugging with tears in their eyes.[6]

Singing Talent: As she is part of an idol duo, Miu possesses a great skill for singing. Both her and Yu have been noted to be more skilled at the art than Pop☆Step.

Retrieved from "https://bokunoheroacademia.fandom.com/wiki/Miu?oldid=283935"
*Disclosure: Some of the links above are affiliate links, meaning, at no additional cost to you, Fandom will earn a commission if you click through and make a purchase. Community content is available under CC-BY-SA unless otherwise noted.