Don't let yourself be motivated by personal grudges. We heroes don't have the authority to make arrests or dole out punishment. It's only because of advances in Quirk regulation that we can use our Quirks at all. But vigilantism is strictly against the rules. And if you're caught going off on your own, that's considered a major crime.
Masaki to Tenya Iida in "Kill Em' Dead"

Masaki is a man with messy brown hair and black eyes. His hero costume consists of a blue and white, skin-tight, long-sleeved shirt that tucks into his orange gloves. He wears dark pants, white boots, and sports a signature helmet that features a fish-like fin and blue visor. 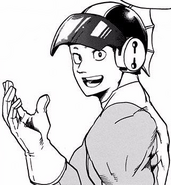 Manual in the manga.

Manual has a very kind, attentive and ordinary personality. He has an inspiring attitude, as he wants to become a role model for all modern heroes and can complete any tasks simply. In the extras, it is revealed that Manual chose Tenya Iida because he feels similar to Tenya.[3] He also has a very keen mind and could figure out the reason that Tenya chose his office was to find Hero Killer: Stain.[5]

Unnamed Water Quirk: Masaki's Quirk allows him to control water. He appears to need an outside source of water and is unable to produce it himself.[6]

Masaki's stats, according to the Ultra Archive Book

Retrieved from "https://bokunoheroacademia.fandom.com/wiki/Masaki_Mizushima?oldid=286606"
*Disclosure: Some of the links above are affiliate links, meaning, at no additional cost to you, Fandom will earn a commission if you click through and make a purchase. Community content is available under CC-BY-SA unless otherwise noted.