Business dealings... are something y'do face-to-face. And I only make deals with people I respect. Not guys who kick the crap outta me first. Sure, I might know the League. Might not. Either way, you ain't getting a thing outta me. Cuz what kinda merchant sells out his customers?! Thanks, but come again when you got the guts to do this right!
Kagero Okuta to the Meta Liberation CEO in "Go! Slidin' Go!"

Kagero Okuta (, Okuta Kagerō?)[1], also known as Giran (, Giran?), is a C-rank villain and broker in association with the League of Villains, working to scout new recruits for their organization.

Giran is a middle-aged man of moderate height and slight build, with eyebrows that appear to be drawn up most of the time and notably squinted-looking pink eyes. He has short gray hair worn parted to his right with side bangs hanging above his eyes, along with a small mustache and a goatee on his chin, and one of his front teeth seems to be missing, leaving a gap in his grin. After being captured and tortured by the Meta Liberation Army, he lost all the fingers of his right hand.

He wears a pair of dress pants and a matching blazer, along with plain black shoes and a shirt which he leaves partially unbuttoned at the top. He has a thick, golden tube-like necklace around his neck that appears to be made up of multiple segments, sometimes along with a fluffy scarf that resembles intestines in shape and color, also sporting a pair of circular glasses on his face. He is often seen smoking a cigarette. 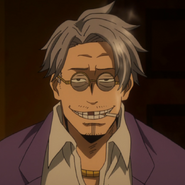 A close-up of Giran.

Giran appears indifferent and unsympathetic towards others, focused only on getting money from his clients. His constant smirk makes him look smugly self-confident. His cell phone case features bunny ears and he lights his cigarettes using the flame of a gun, suggesting he has eccentric tastes.

Despite being only interested in profiting of his dealings, Giran possesses standards. He refuses to have dealings with anyone he hates, and no amount of money or threats will change his mind.[2] Even under the most severe of tortures, such as when his fingers were chopped off, he refuses to collaborate and disclose confidential information of his clients and partners.[3]

He is also willing to offer advise or his opinion to his clients if he thinks it is necessary, and has an open disdain for big businesses trying to cut into his racket.

Business Skills: Giran, according to Kurogiri, is a well-known name in the underworld. He is knowledgeable about current trends and is also great at scouting potential villains. He also successfully deals with illegal costumes, especially with the growing underground popularity of the League of Villains.[4]

Keen Intellect: Giran also demonstrates he has ample scientific knowledge, commenting on how the combination of chemicals Knuckleduster was ordering can result in toxic fumes; as well as knowing that a taser cannot have a built-in AED, as a electric pulses they deliver are different. Along with knowledge of what drugs are able to be consumed in large doses - and ones that aren't - he appears to know a great deal about everything he supplies and how they work.[5]

Muddiness (混濁, Kondaku?): Giran’s Quirk grants him the ability to cause minor amnesia to his target by making contact with their head, causing their memories of the previous five minutes and next five minutes to become vague.[1]

Kagero's stats, according to the Ultra Analysis Book

Handgun: Giran possesses a gun which is able to emit fire,[6] although the possibility of it being a novelty gun-shaped lighter cannot be discounted.

Retrieved from "https://bokunoheroacademia.fandom.com/wiki/Kagero_Okuta?oldid=223093"
Community content is available under CC-BY-SA unless otherwise noted.