Start a Wiki
watch 02:43
'My Hero Academia' Profile: Izuku Midoriya
Do you like this video?

UA
I'm not gonna be your worthless punching bag Deku forever... Kacchan. I'm... I'm the Deku who always does his best!

Quirkless (formerly)
One For All

Though originally born without a Quirk, he manages to catch the attention of the legendary hero All Might and has since become his close pupil and a student at U.A. High, making him the ninth user of the One For All Quirk.

Izuku has green eyes, black curly hair with green highlights and freckles around the cheeks. During his Junior High School days, he wore a black gakuran uniform with yellow buttons. In U.A., he wears the standard male uniform: a light grey suit over a white dress shirt and dark green dress pants, along with a red necktie that he does not tie properly, making it shorter than it should be. Izuku usually wears oversized red shoes. Though initially very skinny, Izuku has gained an array of well-developed muscles after his training with All Might. Izuku is many times described as being very plain.

Izuku's first Hero Costume is a green full-body unitard with a red belt, elbow pads, knee pads, gloves, and red boots. He also wears a mask with long ear-like protrusions that resembles All Might's haircut, and a mask with a smile on it.

During the USJ Arc, while his costume is being repaired, Izuku wears his gym clothes: a blue track suit with thick white lines over his upper body and legs, which form the letters "UA".

Izuku's second Hero Costume has a few changes, though some of the original aspects it has now looks more sturdy and combat efficient in appearance. His 2nd costume is a dark green full-body unitard with the same red boots and elbow pads. The knee pads have be extended to his legs and reach up to his thighs. His mask with the long ear-like protrusions have been shorted and his hair being shown in the back of the mask. His gloves have blue striping on them. His mask is now diamond-shaped and gray and has 2 holes top and bottom, left to right.

During the Hero Licence Arc, Izuku had his costume upgraded to suit his Shoot Style by adding iron soles to his red boots and extending his gloves and added arm braces to them to keep his arms from breaking and making further damage. His knee pads have yellow bolts in them.

After his fight with Shoto Todoroki, the fingers on his right hand became a little deformed, and he gained two scars on the sides of his hand. His right arm is further damaged after his fight with Muscular, leaving various scars through it. 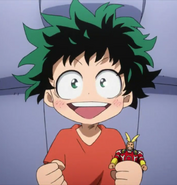 Izuku as a child.

Izuku is a very timid, helpful and polite boy, frequently overreacting to abnormal situations with exaggerated expressions. Due to being bullied since childhood for being born without a Quirk, he is initially portrayed as insecure, being more reserved and not self-expressive, especially in front of Katsuki Bakugo, who constantly subdued him for his aspirations to be a hero. However, after being accepted into U.A. High, making new friends and facing Katsuki during the Battle Trial Arc, he has gradually turned into a more confident and brave person, to the point of developing some leadership skills.

Izuku is also very diligent and strong-willed. Since he greatly admires Heroes, having dreamed to be one since he was a young kid, he developed a habit of writing down notes about everything he knows in regards to them and their Quirks, including even other U.A. students. Because of this practice, Izuku has developed a great analytical mind and is easily able to form complex plans in short amounts of time, often taking advantage of his allies' Quirks to put them in motion. This aspect also helps him in figuring out ways to counter Quirks used by his opponents. Izuku also has the tendency to overthink about anything that grabs his attention, which leads to endless mumbling from his part.

Izuku is a caring person, and will never hesitate to rescue someone in danger, even if he knows that he's not strong enough to do it. Often, he does this in a whim, taking a more careless approach than the usual overthinking he goes through. Izuku has also shown to be selfless enough to try to help people with personal, emotional problems, even if it doesn't concern him, claiming that a Hero is someone that meddles on the lives of other people. Izuku's heroic spirit is recognized by many, having earned the loyalty and gratitude of characters that were previously antagonistic to him such as Tenya Iida, Shoto Todoroki and Kota Izumi.

Of all Heroes, the Symbol of Peace All Might is the one that has had the most impact in his life, with the formerly Number One Hero having shaped most of the goals and beliefs that Izuku follows since childhood. Many of Izuku's decisions and actions are inspired by his desire to become a Hero similar to All Might, and thus he has a great devotion for him, to the point of collecting several pieces of merchandise related to the Hero and emulating several of his traits. Having inherited his Quirk, one of Izuku's current priorities is to be able to live up to his idol's legacy, as he is always looking for ways to improve his usage of One For All, being aware of the immense pressure that is succeeding the greatest Hero of all time.

Izuku appears to have a more brash and abrasive side to him that mostly shows up when he finds himself in combat. This side of him makes him act more like Katsuki, being rather loud and unwavering, and also with a strong drive towards victory. He claims that this is because he sees Katsuki as the embodiment of what someone who strives for victory should be. He also has admitted that he doesn't like this side of him very much, and tends to keep it in check.

One For All (ワン・フォー・オール, Wan Fō Ōru?): Inherited from Toshinori Yagi, Izuku's Quirk gives him access to stockpiled power, granting him superhuman strength[2] and greatly enhanced agility and mobility by spreading his power through his body.[3][4] Though he has yet to demonstrate superhuman speed, immense reflexes, and durability on the level of All Might, Izuku has shown to be able to properly control a small percentage of One For All's power, using it to enhance his strength, speed and agility. If Izuku doesn't spread One For All throughout his body evenly, his body can be immensely damaged from the force of his movements. Izuku has also displayed a type of mental connection to the previous users of One For All.[5]

Recently, Izuku's reflexes and speed seem to have improved with the use of One For All, being able to hold his ground against various incoming attacks during the Provisional License exam. Izuku's control of One For All has improved as he can now use 8% of One For All's power while in Full Cowl.

Overall Abilities: Izuku has decent prowess and physical parameters above the ordinary student. However, he has improved his physical capabilities through training, enough to provide valuable assistance during the battle against Stain. During his second battle with Katsuki, Izuku was able to hold his own against Katsuki and was slightly able to fight back even though he was still outmatched in strength and speed; Izuku was also able to injure Katsuki, which shows a drastic improvement in Izuku's abilities as in his first battle with Katsuki he wasn't able to inflict any damage at all.

Keen Intellect: Izuku has proven to be exceptionally intelligent on many occasions. He has displayed keen skills of observation and analysis. It is usually his intelligence that has helped him more than his Quirk. Izuku is able to formulate strategies that takes advantage of the situation and uses his knowledge to creatively utilize the Quirks of other people to their full potential, such as working together with Tsuyu and Minoru to escape the villains at the flood zone in the USJ. Izuku also has extensive knowledge on Pro Heroes and their Quirks as well. Izuku's intelligence has allowed him to figure out One For All's mechanisms, allowing him to utilize the Quirk more efficiently in a short space of time. Gran Torino even compliments Izuku's intelligence, saying that Izuku is the type of person who thinks before he acts.

High Pain Tolerance: Izuku is shown many in many occasions that he is able to handle and bear with a lot of pain, such times are mostly because of the repercussion of over-using his Quirk; however, he can still manage to move his body despite feeling excruciating pain.

Izuku's stats, according to the Ultra Archive Book

Retrieved from "https://bokunoheroacademia.fandom.com/wiki/Izuku_Midoriya?oldid=67423"
*Disclosure: Some of the links above are affiliate links, meaning, at no additional cost to you, Fandom will earn a commission if you click through and make a purchase. Community content is available under CC-BY-SA unless otherwise noted.