Start a Wiki
watch 01:50
'My Hero Academia' Profile: Inasa Yoarashi
Do you like this video?

I believe heroes should be hot-blooded!! So good job with this white-hot battle, guys!! I freakin' love it!! If it's not too much trouble, I'd like to join this white-hot battle!! Please and... thank you!!!
Inasa Yoarashi in "White-hot Battle! To Each Their Own Strengths"

Inasa Yoarashi (イナサ, Yoarashi Inasa?), also known as Gale Force (レップウ, Reppū?), is a first-year student at Shiketsu High School training to become a Pro Hero. He was the top recommended student for U.A. High before withdrawing his application.

In his school uniform, Inasa wears the same white collared shirt and dark pants as all Shiketsu High students. He also sports Shiketsu's signature hat whether he be in uniform or in his hero costume.

Inasa's Hero costume consists of a thick burgundy suit pinned together with yellow buttons. A cape is draped over his shoulders, the collar lined with thick fur, and it almost conceals the jetpack-like propulsion system attached to his back. His left arm is completely concealed by the thick, brown material and his hand sports a large tan glove with air pipes on it, whereas his right arm is completely exposed other than the skin tight blue sleeve that appears to be apart of his undersuit. Similarly to his left hand, are several tubes around his torso and ankles, which are used to expel wind power to aid with his Quirk. Plates resembling gas masks pad his knees and left shoulder, and he completes his costume with large brown shoes and a pair of goggles around his head.

Inasa Hero costume in the manga. 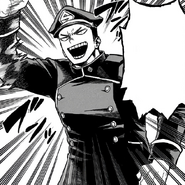 Inasa's school uniform in the manga.

Inasa is an energetic, hyperactive, and enthusiastic young man who expresses himself with vigor. He's very loud and can come off as obnoxious but he's actually oddly polite and speaks very formally most of the time. Inasa claims there is almost nothing he dislikes, and growing up as a kid he enjoyed everything.[3] Inasa has a habit of approaching strangers to try and make friends with them. Sometimes he gets so worked up that he'll start talking emphatically about being passionate, and the person or people he's talking to tend to get confused.[4]

Inasa's signature trait is his undying love for passion above all else. He believes all heroes should have a fiery passion that motivates them to help others. Inasa also appears to enjoy passionate battles and desires to be a part of them.[5]

Inasa disapproves of heroes who do not have hot spirits and believes people filled with hatred are unfit to be heroes and he refuses to recognize them as such. This is why Inasa hates Endeavor and his son Shoto. Both of them had cold angry eyes when Inasa met them and both of them blew him off despite his warm greetings.[3] Inasa's grudge against the Todorokis eventually drove him to become the type of person he hated. He had cold angry eyes whenever he encountered Shoto during the hero licensing exam and even told him to his face that he hated him. Inasa hated Shoto so much so that it cost him his provisional hero license the first time around because they refused to work together.[3] This caused Inasa to reflect on himself and apologize to Shoto following the exam.[6] Despite the fact that he still hates Shoto in the end, Inasa was sincere to him, showing that his hatred of him has toned down.

Overall Abilities: Inasa is a very powerful hero-in-training who earned the top score in the U.A. Entrance Exam for recommended students. This means that his abilities are believed to be above that of Shoto Todoroki, one of U.A. High School's strongest students.[3] Even though he withdrew his application from U.A. High School, he established himself as one of the most powerful students at Shiketsu High School.

Inasa also possesses a great handle on his powerful Quirk, Whirlwind. He can channel countless different wind currents at once and manipulate them to move debris and people without making them collide with one another.[7] Offensively, Inasa often sends strong gusts of wind at his opponents, effectively blowing them away.

Defensively, Whirlwind is effective at deflecting projectiles and giving Inasa the maneuverability to evade incoming attacks. Inasa is able to propel himself off the ground through wind bursts as well, which bestows him with a speed boost that does not require his hero costume to perform.

With his proficient Quirk handling, Inasa was able to pass the first test of the Provisional Hero License Exam on his own (a test normally reserved for second-year students) while eliminating 120 other examinees at the same time.[5]

In the final stage of the licensing exam Inasa and Shoto both faced Gang Orca, the No. 11 (formerly No. 10) Pro Hero. But due to the pair's personal conflict with each other, Inasa's Whirlwind clashed with Shoto's Half-Cold Half-Hot Quirk because heat from the latter's flames compromises the airflow.[8] This infighting resulted in Inasa and Shoto repeatedly being unable to land an attack on Gang Orca and were left at the mercy of him and his sidekicks.

Soon after, however, Inasa and Shoto realized their mistake with being uncooperative with one another, put their differences aside, and the two of them finally worked together, despite being incapacitated. With their newfound camaraderie, Inasa and Shoto combined the elemental powers of their Quirks to create a tornado of fire that engulfed Gang Orca, nearly defeating the No. 11 Hero.[9] Gang Orca acknowledges that if the battle had been drawn out any longer, Inasa and Shoto's teamwork would’ve successfully defeated him.

Whirlwind (旋風, Senpū?): Inasa's Quirk grants him the ability to freely manipulate the air around him over a very wide area.

He can create incredible gusts of wind, and has an extremely precise control over them, being able to delicately handle people while clearing away rubble using various different types of winds.[7]

Inasa is also able to use whirlwinds for offensive purposes. He can attack his enemies and blow them away with gusts powerful enough to break apart solid ice.[8] He can also use the wind to increase his own mobility, and with aid from his costume, he's even able to fly.[10]

Inasa's stats, according to the Ultra Analysis Book

Retrieved from "https://bokunoheroacademia.fandom.com/wiki/Inasa_Yoarashi?oldid=231214"
*Disclosure: Some of the links above are affiliate links, meaning, at no additional cost to you, Fandom will earn a commission if you click through and make a purchase. Community content is available under CC-BY-SA unless otherwise noted.