Flashback of Hizashi with his classmate Oboro 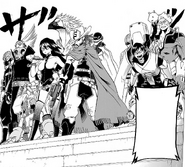 The U.A. staff arrive for backup against the League.
U.A. Sports Festival Arc

Present Mic faces Kyoka and Koji for their final exam. 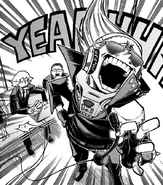 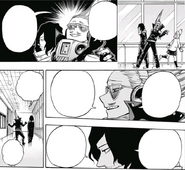 Shota and Hizashi try to awaken Oboro within Kurogiri. 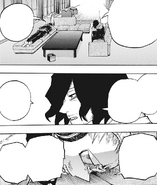 Shota and Hizashi continue to be affected by the truth.

The Heroes ready to take down Tomura Shigaraki. 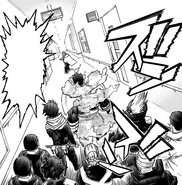 Kyudai gets caught by Endeavor's team. 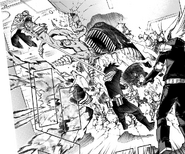 The Heroes ambushed by the unexpected arrival of the Jaku Hospital Nomu. 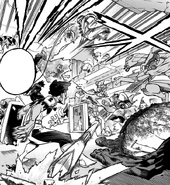 Endeavor and his team hold off the Jaku Hospital Nomu.

Present Mic and co. join the fight against the High-Ends.

The Heroes fend off the remaining Nomu. 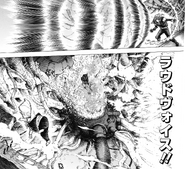 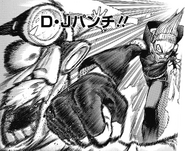 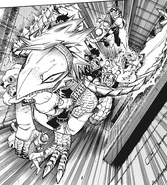 Present Mic and the rest of the Heroes evacuate the hospital.
Appearance

Present Mic among the U.A. faculty brought to the U.S.J. by Tenya Iida.

Present Mic and Aizawa commentate for the Sports Festival.

Present Mic matched up against Kyoka and Koji.

Present Mic says there is a traitor at U.A. High.
Remedial Course Arc

All Might and Present Mic accompany the boys to take the Exam.

"Are you ready for the course?"

Present Mic decides to provide commentary on the "battle". 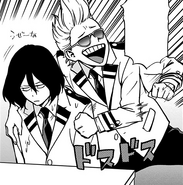 Hizashi is reminded he hasn't picked a Work-Study location.

Hizashi Hero Costume during his second year at U.A.

Hizashi during Class 2-A Training Exercises

Meeting Nemuri for the first time. 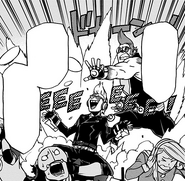 Hizashi and Sensoji Team up. 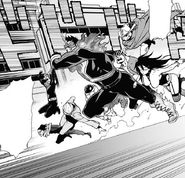 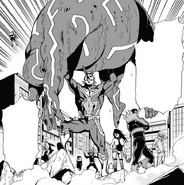 The heroes are victorious.
Vs. Queen Bee Arc 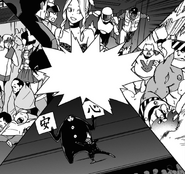 Hizashi in Volume 1 (US cover)

Hizashi on the back of Volume 4 (US cover)
Chapter Covers

Hizashi in Chapter 146's color spread and 3 year anniversary of the manga.

Hizashi on the promotional poster for Season 2（Poster 2). 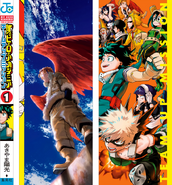 Volume 1 Spine and Illustration
Retrieved from "https://bokunoheroacademia.fandom.com/wiki/Hizashi_Yamada/Image_Gallery?oldid=269398"
*Disclosure: Some of the links above are affiliate links, meaning, at no additional cost to you, Fandom will earn a commission if you click through and make a purchase. Community content is available under CC-BY-SA unless otherwise noted.