I just wanna love, live and die my way. My normal way. I wanna be even more like the people I love.
Himiko Toga to Chitose Kizuki in "Bloody Love"

Himiko Toga (, Toga Himiko?)[2] is a major supporting antagonist and was a member of the League of Villains, affiliated with the Vanguard Action Squad.[3] Himiko served as one of the main antagonists of the Forest Training Camp Arc, and she is also featured as an antagonist during the Provisional Hero License Exam Arc and the Shie Hassaikai Arc.

She later became one of the nine lieutenants of the Paranormal Liberation Front, an organization formed from the remnants of the League and the Meta Liberation Army.

Himiko is a relatively petite, fair-skinned girl who is very prone to blushing and is frequently described as having a rather pretty face. She has slightly inward-tilting eyes, their irises bright yellow and their pupils thin slits, making them somewhat resemble those of a cat, and her wide mouth is also rather feline, as both her upper and lower canines are more pointed and longer than the rest of her teeth. Her hair is a pale, dirty ash-blonde and is styled into two messy buns, numerous wild strands sticking out at all angles from their centers and where they’re fastened, a straight fringe and two chin-length side bangs to frame her face.

Her casual outfit consists of a plain seifuku with a Kansai collar, both the skirt and the shirt dark blue with a double white trim, which is paired with a red scarf that she ties loosely below. Over this she wears an oversized beige cardigan with a rather long hem and cuffs, and pockets on either side, the right one shown to hold a number of trinkets on either a keychain or a cellphone strap.[4] She sports knee-length black socks and dark brown dress shoes with thick heels, the same as the outdoor uniform shoes students traditionally wear in Japanese schools.

In her villain attire, she wears this same outfit but with a few additional gadgets and pieces, such as her piped black mask, the boxes of knives strapped around her thighs, and a blue utility belt around her waist with more little green boxes attached to it on either side. The most noticeable new feature is the loose black mask she wears around her neck, which is decorated with pieces of pale metal in the shape of a carnivorous grin. Three large silver canisters are attached to the sides of her mask, needles poking out of their tips and wires their bases, which connect them to the two larger cylinders strapped to the back of her belt, this whole mechanism used to suck people’s blood for Himiko to use with her Quirk.

Following the battle with the Meta Liberation Army, Himiko appears to have damaged her right eye and wears a black eyepatch over it. She also wears a new coat, given to her by Skeptic, to replace the one she damaged in her fight against Curious.[5]

Himiko in the manga. 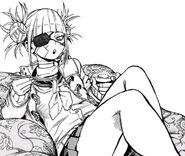 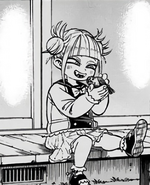 Himiko as a child. 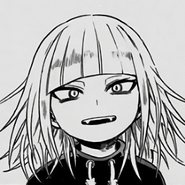 Himiko during middle or pre-school.

Himiko's villain outfit in the anime.

Himiko in My Hero One's Justice.

Himiko is a very cheerful girl, to the point of smiling even after having presumably killed someone, displaying apparent sadistic tendencies.[7] This continues even when danger is imminent, as when Tomura Shigaraki was about to attack her,[8] but it tends to stop when she is bored or annoyed. Himiko is frequently seen blushing seemingly out of excitement rather than embarrassment, giving her a permanent look of what appears to be lovesickness on her face. However, she has shown that she can easily be embarrassed, such as when she thinks people are coming on to her,[9] or when she is naked when copying clothes of the people she has transformed into.[10]

Himiko is obviously mentally unstable and has a very twisted perception of love and friendship. Proven when, despite wanting to kill Ochaco Uraraka and Tsuyu Asui, she attempted to befriend the two girls as they fought- affectionately calling the latter by her first name and describing the former as "lovely". When talking to Ochaco, she said that it was only natural to want to be like the one you love, to the point of literally becoming that person. Later she further explains and compares that like how "normal" people kiss the people they love as "normal", she sucks the blood of the people she loves as this is her "normal", further showing her twisted understanding of love, which thus justifies her carving up and butchering "guys who are tattered and reeking of blood", as they fit the description of her ideal lover.[11] Himiko's interest isn't just superficial, as her questioning Izuku Midoriya about what his values and beliefs imply, showing that although twisted, she does indeed want to know more about the person she "loves".

Himiko is quite courageous, or at least very confident when using her Quirk, even impersonating an aspiring hero and taking part in an exam that gathered multiple students of heroics and pro heroes. She also has shown a comedic and childlike demeanor when faced with different situations, such as when she was with Twice or when she attempted to insult Mimic.

Like most of her allies, Himiko has stated that she finds life to be difficult for the current world and wants to make it an easier place to live in. She looks up to Stain and sees him as her role model; declaring a desire to kill and "become" him (possibly in reference to her Quirk).[8] In stark contrast to her maniacal nature, Himiko has shown a very supportive side as she comforted Twice, knowing he feels the most responsible for causing Magne's death and covering a part of his ripped mask to prevent him from splitting. By extension, she is shown to care greatly about her comrades, and was enraged enough by Magne's death that she wanted to kill Overhaul and his men as payback.

Himiko is also shown to be prone to mood swings, when she finds a target of "affection" (often Izuku) she is loud and cheerful. However when an obstacle gets in between her and her prey, she shows a very angered expression, instantly switching priorities to kill whoever the nuisance is.

In the past, Himiko was noted by her family and former classmates to be, "a cheerful, reasonable, well-mannered girl" whose subsequent turn to a life of crime surprised everyone who knew her. However, her own recollections imply that this was merely an act she put on to try and fit in with what society deemed "normal." She believes the way she acts presently is her own normal.[12]

Re-Destro theorizes that her twisted personality came off as a result of her Quirk being blood-related, thus prompting a natural inclination towards it, and by proxy her non "normal" behaviour, which was later emphasized due to societal norms.

Overall Abilities: Himiko is a master of disguise, infiltration, and stealth as well as a very talented combatant, being fully capable of taking on Pro Heroes in close quarters combat. She proved to be a contender in the licensing exam in spite of its strict competition, passing the first phase without needing it to be her priority.[13] One of Himiko's most prominent traits is her skill in espionage. By holding her breath and clearing her mind, Himiko can erase her presence and allegedly vanish from her enemies' view. This ability isn't limited to ambushes, but can be used in combat as well, disappearing if the opponent averts their attention from her, even for an instant. When Himiko disguised herself as Camie Utsushimi, she was able to overpower and ambush Izuku, one of U.A. High School's most powerful students, with sneak attacks.[14]

Despite lacking a Quirk that amplifies her physical abilities, Himiko is still a very capable combatant, utilizing her incredible agility, great reflexes and acrobatic skills. She is also adept at creating openings to conceal herself, such as intentionally forcing an opponent to dodge.[14] Himiko's swiftness was shown when she used Eraser Head’s Capturing Weapon against him by rolling herself in it and stabbing him once she got in close before he was able to restrain her,[1] as well as when she swiftly tapped each of Chitose's followers while using Ochaco Uraraka's Zero Gravity Quirk to levitate them before any of them could react.

Transform (, Henshin?): Himiko's Quirk grants her the ability to take on the complete physical appearance of another individual by ingesting their blood, including their voice. She also can copy and change their clothes, getting naked before doing this as her regular clothes would overlap her disguise. She can shift between multiple disguises if she has consumed different people's blood.

Himiko has been described as the perfect impersonator,[15] never having been caught while impersonating someone. She was also able to impersonate Camie well enough to infiltrate Shiketsu High School for several days, and also take part in the Provisional Hero License Exam, without any Shiketsu students becoming the wiser until she left.[15] She can perform well enough to even fool Izuku into believing that she's Ochaco, though Izuku was able to tell when Himiko was impersonating Ochaco mostly because she couldn't apply Ochaco's Quirk.

Upon deactivating her Quirk or switching to another disguise, Himiko's disguise melts into a gray liquid.[10] The duration of her transformation depends on the amount of blood consumed.

Himiko's Quirk allows blood ingested to become energy, hence the amount she ingests affects how long she is capable of staying transformed. Approximately one cup of blood is equivalent to one full day of being in a transformation.[10]

Retrieved from "https://bokunoheroacademia.fandom.com/wiki/Himiko_Toga?oldid=210746"
*Disclosure: Some of the links above are affiliate links, meaning, at no additional cost to you, Fandom will earn a commission if you click through and make a purchase. Community content is available under CC-BY-SA unless otherwise noted.