With your positions revealed, you're in my crosshairs. And there's no hiding from the coming storm. As Hawks would say... speed beats power.
Fumikage Tokoyami to Shihai Kuroiro and Kinoko Komori in "Foresight"

Fumikage is a short young man with the head of a black bird, possibly supposed to resemble that of a crow or a raven. He has a tan, yellowish beak which is slightly hooked down at the end, thin, red eyes with a small black pupil, one on each side of his head, and a red choker, which he rarely removes. Despite the appearance of his head, however, his body is of normal human shape, with rather fair skin. After his internship training with Hawks, Fumikage has become more muscular.

His costume consists of a robe, black, but tinted a dark purple where light hits it, that covers his entire body, only stopping halfway down his shins, and knee-high black boots. During the Joint Training Arc, it was revealed that under this cape he wears a dark t-shirt, wristbands, a pair of baggy pants, similar to the ones Katsuki Bakugo wears in his hero costume, and a utility belt with a double pin buckle. 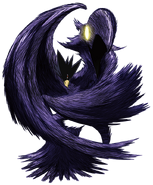 Fumikage with his Dark Shadow.

Fumikage in My Hero One's Justice. 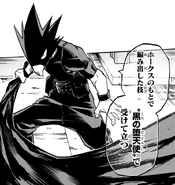 Fumikage is reserved, serious, and focused, albeit noble and valiant as well. Though he does not talk very much, he will directly ignore questions or requests that seem in some way pointless (like Tenya asking him to not sit on the desk) while he talks to other people as some sort of ongoing joke. When Fumikage teams up with others, he becomes more sociable, helping his teammates out, reassuring his trust in them, and thanking them for their effort. During combat, Fumikage is known to be fierce and dependable, with his strength and capabilities rarely being questioned.

Fumikage is fond of darkness and other related concepts, considering himself a "creature of the dark" and employing archaic-sounding speeches that end up painting him as slightly creepy or dramatic. Nevertheless, Fumikage is a bit insecure about his interests due to them being more on the arcane, fantastical side, and thus harder for others to understand or relate to. Regardless of his association with dark themes however, Fumikage does not show any sort of villainous behavior at all. In fact, he greatly cares for his friends and mentors, and should harm come their way, Fumikage may end up feeling enraged or indignant, which can lead to disastrous consequences due to his Quirk being sensitive to his emotions.

Fumikage also possesses a great amount of humility, being aware of his own limits and understanding when it's time to back down. He takes any advice he gets seriously and uses it to try and improve on his Quirk and abilities, showing great determination to even keep up with top heroes like Hawks. Fumikage thinks little about fame and idolatry but is still prideful enough to not tolerate being underestimated or looked down upon by others.

Whilst initially quiet, and in some cases timid in the face of dangerous situations (such as when he believed the Pro Heroes should rescue Katsuki after his capture), Fumikage later proves himself to be a confident, brave young man worthy of the title of hero when he risks his life to save Hawks at the hands of Dabi.

Overall Abilities: Fumikage has continually shown to be one of the strongest members of Class 1-A, equaling, and sometimes surpassing the likes of Izuku Midoriya, Katsuki Bakugo, and Shoto Todoroki. Fumikage's skills allowed him to earn 9th place in the U.A. Entrance Exam, having the fifth-highest amount of villain points, 5th place in the Quirk Apprehension Test, and 3rd place at the U.A. Sports Festival. Fumikage has incredible proficiency with his Quirk: Dark Shadow, using it for both attack and defense, boosting his mobility, and even aid in rescue operations. Fumikage's abilities have received praise from several prominent and notably powerful characters, including the likes of All Might, Hawks, Izuku, Shoto, and Fat Gum.

During the Sports Festival, he was able to force Momo Yaoyorozu, a recommended student, on the defensive, and defeat her before she had a chance to fight back. Observing this spectacle, Izuku remarked that Fumikage is one of the strongest people when it comes to one-on-one battles. Later on, Fumikage managed to hold off Katsuki, another one of the Class 1-A's strongest members, for some time despite having a Quirk-type disadvantage, and Dark Shadow not being at its full potential. All Might himself acknowledged Fumikage's strength and gave advice on how the latter can improve. Even Shoto was was amazed by Fumikage's strength after witnessing his Dark Shadow effortlessly pulverize and defeat Moonfish, an villain that kept both him and Katsuki on the defensive. Fumikage's prowess was enough to garner the attention of Mr. Compress, who attempted to capture him after watching him demolish Moonfish, and the Pro Hero Hawks, at the time the No. 3 (now No. 2) Pro Hero, who took Fumikage as an intern.

During the Provisional Hero License Exam, Fumikage used the advice given to him by All Might, and the experience gained in the Final Exams to create "Black Abyss," a Super Move which removes Fumikage's physical weaknesses. He was able to accomplish this feat within 5 days of intensive training and proceeded to create 2 more super moves relating to "Black Abyss". And due to the work-study training he received from Hawks, Fumikage improved Dark Shadow to the point where he is able to make it travel further away from his body (though the further Dark Shadow travels, the quicker his energy drains), and develop an ability known as "Black Fallen Angel." Hawks stated that Fumikage, after the latter developed a more muscular physique, has improved on his weaknesses (i.e. close-range combat). Hawks' sidekicks were also in awe of Fumikage's new abilities, remarking that he still has room for growth. Fumikage then demonstrated his drastic improvement during the Joint Training Battle between Classes 1-A and 1-B. His newly-acquired speed and strength allowed him to take down Kinoko Komori and Shihai Kuroiro in a single blow. However, because Fumikage failed to render Kinoko unconscious, the restrained fungus-producing heroine implemented mushrooms in his throat and lungs, effectively incapacitating the Jet-Black Hero through asphyxiation.

During the events on Nabu Island, Fumikage once again shows off his refined skills. Using the incredible speed given by "Black Fallen Angel", he's able to save Mashirao Ojiro from being crushed at the hands of Chojuro Kon. Against Chimera, however, Dark Shadow was outmatched in terms of raw power. Even alongside several other members of Class 1-A, Fumikage was unable to defeat Chojuro (and whilst Dark Shadow was not at full strength, neither was Chimera). Later, Fumikage was chosen to face-off against Kiruka Hasaki, with Mina Ashido providing backup. Considering that Class 1-A did not know the magnitude of Kiruka's Quirk, there was a great deal of confidence and trust in Fumikage's abilities. Whilst initially on the defensive, Fumikage was able to briefly overwhelm and stun the agile combatant, providing an opening for Mina. After Mina was injured, an enraged Fumikage unleashed the full power of Dark Shadow on Kiruka, effortlessly overwhelming and defeating her (though not before Kiruka collapsed the cave in which they were fighting).

During the Paranormal Liberation War Arc, Fumikage is once again shown to have significantly bolstered his strength, and ability to fight on all fronts. He's chosen alongside Denki Kaminari to assist in the assault on the Gunga Mountain Villa sanctuary, despite the Stun Gun Hero's light-based Quirk posing a risk to Dark Shadow being weakened. Utilizing his new Super Move, "Ragnarök", Fumikage was able to push back Re-Destro, a villain capable of mass destruction who even Tomura Shigaraki struggled to defeat, though it's unclear whether Dark Shadow was simply stronger or if Re-Destro's legs failed. Later, Fumikage returned to the battlefield after escaping from Fat Gum's fat (something the BMI Hero remarked has never happened before) and utilized his incredible speed to save Hawks from death at the hands of Dabi.[1]

Tactical Intellect: Even though he is not the most academically efficient, Fumikage has proven himself to have a strategic mind. He ordered Dark Shadow to guard his team's blind spot during the Human Cavalry Battle and grabbed one of Shoto's headbands when the opportunity arose. Using the knowledge he has on Shihai's Quirk, Black, Fumikage was able to exploit the standby function of the latter's power by using his black-colored cape to trap the Scheming Hero, knowing that’s Shihai would instantly integrate with it. When pitted against Dabi, Fumikage, in spite of being placed at a disadvantage due to the enclosed area wherein they battled, and the light generated by Dabi's flames, he was able to exploit an opening created by Geten's nearby attack and Dabi's tendency to monologue in order to escape the flame-wielder with Hawks' unconscious body.

Dark Shadow (, Dāku Shadō?): Fumikage's Quirk allows him to manifest a sentient shadow monster from his body that he can materialize and contract freely. Dark Shadow's energy is limited and can be drained by bright light. When it runs out of energy, Dark Shadow retracts back into Fumikage's body.

The personality, strength, defense, and control of the shadow monster depends on the lack of light. In bright light, Dark Shadow is weaker and smaller in size, but still has considerable strength and defense and is easier to control. In total darkness, Dark Shadow is much bigger, which grants it far greater strength and defense. It is even powerful enough to rip out and cut down multiple full-grown trees with ease. However, Dark Shadow is more difficult to control in the dark, causing it to rampage based on its own free will.

As part of his training, Fumikage trained in a dark cave in order to increase his control over Dark Shadow, even when there is darkness empowering his Quirk. This training proved effective when Fumikage activated Dark Shadow in pure darkness and it was still the same size it would be if it were daytime. Due to a run-in with League of Villains member, Moonfish, it was revealed that, besides light and darkness, there are more internal factors that influence Dark Shadow. According to Mezo, Fumikage's negative emotions (such as regret and indignation) intensify Dark Shadow, making it more unruly and powerful as a result, albeit at the cost of Fumikage losing control; Fumikage himself even stated that his anger causes him to lose control of Dark Shadow. Dark Shadow also seems capable of eating as he took some food when Class 1-A celebrated Christmas.

Claws (film only): During his fight against Slice on Nabu Island, Tokoyami was shown to wield a set of gloves with metal claws. These claws were broken during the battle.

Retrieved from "https://bokunoheroacademia.fandom.com/wiki/Fumikage_Tokoyami?oldid=300871"
*Disclosure: Some of the links above are affiliate links, meaning, at no additional cost to you, Fandom will earn a commission if you click through and make a purchase. Community content is available under CC-BY-SA unless otherwise noted.