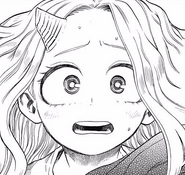 Meeting Eri for the first time. 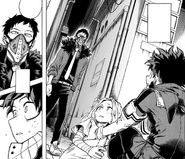 Eri looks back in horror towards her caretaker, Overhaul. 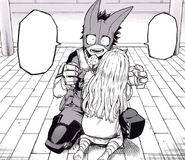 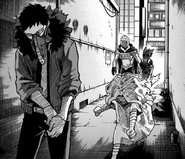 Eri obediently runs back to Overhaul. 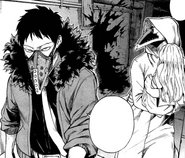 Eri is revealed to be a key point in Chisaki's plan. 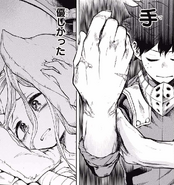 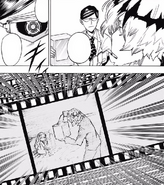 Overhaul's plan is about to reach its climax. 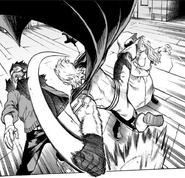 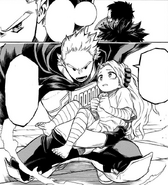 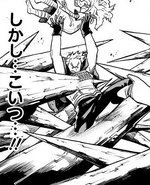 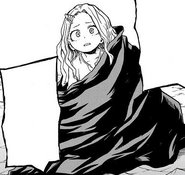 Lemillion resolves to protect Eri till the end!

Nighteye relieved at the sight of Mirio and Eri safe.

Eri realizes that she wants to fight against fate. 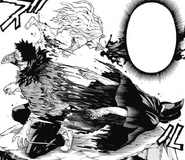 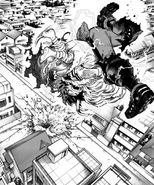 Deku askes Eri to lend him her power.

The final battle between Deku and Overhaul.

Eri loses control of her Quirk. 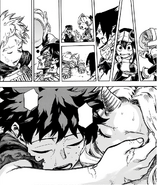 The mission ends with success. 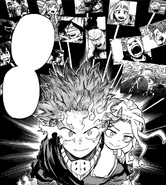 Deku's bond with the others helped him overcome the odds.
U.A. School Festival Arc 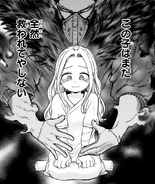 Izuku and Mirio take Eri around the U.A. school festival.

Everyone prepares for the festival.

Mirio, Shota and Eri heading to the School Festival. 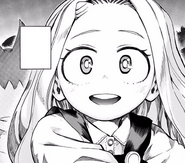 Eri happy to see Izuku and friends performing their play. 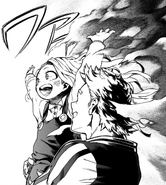 Shota asked Neito to help him with Eri.

"You saved me, didn't you?"
Endeavor Agency Arc 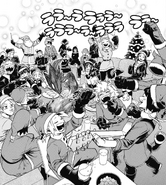 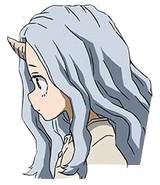 Eri as a child, seen in Overhaul's flashback

Eri runs back to Overhaul.

Eri is revealed to be involved in Overhaul's plan.

Mirio swears to be Eri's Hero

"Heroes wear capes to wrap up little girls in pain!"

Eri realizes that Mirio is her hero. 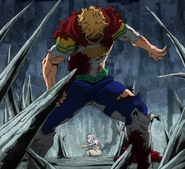 Resolved to protect Eri, Mirio stands in the way to save her.

Overhaul asking Eri if she wants people to die because of her.

Eri goes back to the fight.

Eri realizes she wants to fight back against fate.

Eri uses her Quirk to rewind Overhaul and Shin back to their normal selves.

Izuku binds Eri to him.

Eri lends Deku her power, boosting his Quirk in the process.

Final showdown between Deku and Overhaul.

Deku finishes off Overhaul for good.

Deku and Eri succeed in changing the future!

Deku and Eri were able to defeat Overhaul with everyone believing in them.

The Shie Hassaikai's reign of terror is over!

Eri has to be in the hospital.
Remedial Course Arc

Mirio explains to Eri what the candied apples are.

Izuku and Mirio take Eri on a tour around U.A. High.

Eri wants to see the festival.

Eri can't wait for the festival.

Mirio and Eri on their way to the festival.

Eraserhead and the Big Three taking care of Eri

Deku at 100% power unleashes his full power on Overhaul.

Eri undoes the fusion between Overhaul and Rikiya.

Eri as a child, as seen in Kokai no Uta.
One's Justice 2 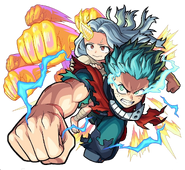 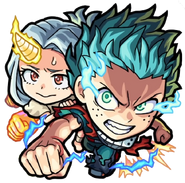 Eri on the back of Volume 17

Eri in Volume 20 (US cover)
Chapters 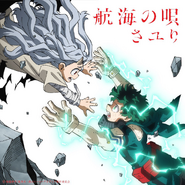 Eri on the promotional poster for Season 4 (Poster 8 ver.1).

Eri on the promotional poster for Season 4 (Poster 8 ver.2).
Merchandise 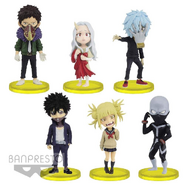 Illustration by Yoco Akiyama.
Retrieved from "https://bokunoheroacademia.fandom.com/wiki/Eri/Image_Gallery?oldid=282481"
*Disclosure: Some of the links above are affiliate links, meaning, at no additional cost to you, Fandom will earn a commission if you click through and make a purchase. Community content is available under CC-BY-SA unless otherwise noted.