During his battle against High-End, Endeavor's left side of his face was greatly damaged after being hit by a surprise attack. After receiving surgery and being healed by Recovery Girl's quirk, his eye was shown to be alright though he now has a jagged scar.[4][5] 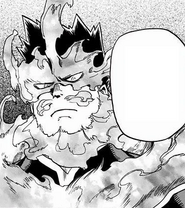 Enji has been described by his son as a prideful and ambitious man driven by his goal to surpass All Might. His desire to surpass the number one hero has driven him in family matters too, having "created" his children in hopes of having an offspring that could surpass All Might.[6]

This drive has followed him his entire life, and repeated failure has plagued him from a young age. He had no interest in the title or the fame of the position, instead wanting to have earned it on merit and ability.[7] This divide in ability and ambition influenced his adult life and decisions regarding his family. Some signs of regret are shown when he contemplates on how his ambition drove his family life into pressure and abuse.[8]

Endeavor constantly pushes Shoto to try and surpass both himself and All Might so he can achieve his own goal of becoming the best. This ambition can be seen in how he ignores the rest of his children and focuses only on Shoto while preventing him from interacting with his siblings.[9] He appeared proud of Shouto when he used his flame side during the U.A. Sports Festival,[10] and when he chose Endeavor's agency for workplace training.[11]

Enji has a bad temper which has been demonstrated on several occasions such as when he saw All Might's true form and shouted in rage at the number 1 hero for hiding such a state, angered that his lifelong goal seemed so pitiful.[12] This was shown again after All Might was forced into retirement and Endeavor would be given the No. 1 spot by default he destroyed his training hall, furious he was being put into the no. 1 spot without having earned it.[13] Then storming off and demanding Hawks foot the bill for the meal they shared. after believing he had wasted his time.[14]

Endeavor's behavior does not go unnoticed by the public, his dismissive and aggressive behavior a selling point to his fans.[14]. While he is a hero and possesses an amount of supporters, there are those in the public who recognize his less charismatic nature and comparing him to All Might brings doubt to the position of No. 1. According to Present Mic, Endeavor is usually not a sociable person. Despite this, his competence at solving crimes and defeating villains is unquestioned, with Endeavor having dedicated his life to studying and training to attain the top spot of the Hero rankings.

During Shoto's retake of the Hero License exam, Endeavor asks All Might for advice on what it means to be a Symbol of Peace, showing a rather calm expression towards the former No.1 Hero instead of dismissing him and his advice as usual.[15] After hearing All Might's response, Endeavor accepts this information, and resolves to work towards that ideal. After Shoto gets his hero license, Endeavor tells him how he is proud of his son and vows to become a proper father and a better hero, much to Shoto's happiness. He is also shown to be more respectful of Shoto's boundaries, having backed down from physical contact after Shoto knocked him away.[16]

During the Hero Ranking Ceremony Endeavor is shown to be more dedicated to the goal of becoming worthy of the No. 1 rank and the new symbol of peace.[17]

Overall Abilities: Endeavor was ranked second of Japan's heroes, before taking the spot of Number 1 after All Might's retirement. As he is ranked very highly, Endeavor is an immensely powerful hero, which has been proven in his fight against the League of Villains. Endeavor is able to take on and defeat several Nomus without sustaining any damage, for which he is praised by the likes of even All For One, Japan's most powerful villain.[18] During his fight with High-End, he is able to damage and outmaneuver the creature, overwhelming him in combat despite having the physical disadvantage and ultimately defeat him with the help of Hawks.

Enhanced Strength: After years of physical training, Enji eventually possesses incredible physical strength, however despite that his strength is not at the level of All Might, the force behind his punch was strong enough so to break apart Nomu's arm with only one punch.[18]

Enhanced Durability: Endeavor possesses incredible durability seen when he is able to withstand being thrown into multiple buildings in his battle against High End.[19]

Enhanced Pain Tolerance: Endeavor is far more resistant to pain than the average Pro Hero, as seen when he is able to keep standing up, despite receiving numerous attacks from High-End and long after his body should have been unable to move.[20]

Indomitable Will of Fire: One of Endeavor's most prominent traits is his ability to never give up regardless, befitting of his hero name. This was shown in two instants where he continues to bridge the gap between him and All Might regardless of the differences in their abilities, and continues to push past his limits and injuries in his battle against High-End.[20]

Keen Intellect: Enji has extraordinary intelligence, having used it to tally up the most resolved criminal cases in history. He has very keen deductive skills, shown when he deduced that Izuku had a very powerful Quirk that stacks up to All Might's after only seeing it used briefly. In combat, he was able to swiftly decide that the best course of action would be to carbonize Nomu's cells in order to prevent regeneration.[18] Throughout his battle against High-End, Enji display more of his intelligence as he analyse the situation against the Nomu while simultaneously fighting it.

Hellflame (ヘルフレイム, Herufureimu?):[21] Enji's Quirk allows him to produce and manipulate fire at will. His pyrokinetic abilities give him a wide arrange of ways to use it. He appears to be immune to other flames, and can easily control the shape and temperature of the blaze as well.[18] However, using too much of his power can deplete his stamina and ruin his physical functions.[4]

Retrieved from "https://bokunoheroacademia.fandom.com/wiki/Enji_Todoroki?oldid=124708"
*Disclosure: Some of the links above are affiliate links, meaning, at no additional cost to you, Fandom will earn a commission if you click through and make a purchase. Community content is available under CC-BY-SA unless otherwise noted.