Surely we're going to see big changes in our day-to-day lives. At this point, we ought to be looking into how those changes will present themselves and what we can do to prepare.
Daikaku Miyagi in "Unleashed"

Daikaku Miyagi (, Daikaku Miyagi?) is a newscaster who occasionally reports daily news of recent events occurring throughout the series.

Daikaku is a man with noticeable facial wrinkles, who wears his greenish, straw-colored hair slicked back behind his head. His most prominent features are the two horns protruding from each side of his forehead, which is a result of his Quirk.

Daikaku cut off one of his horns in order to relay the news with more ease, a decision considered controversial by his viewers.

He’s always seen wearing a suit, consisting of a dark blue blazer, a pale pink shirt, and a brown tie, as well as his square-shaped glasses. 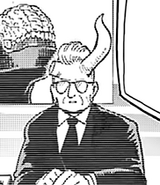 Big Horn: Daikaku's Quirk gives him a pair of bull-like horns on his forehead. He cut the right horn off, though.[1]

Retrieved from "https://bokunoheroacademia.fandom.com/wiki/Daikaku_Miyagi?oldid=276402"
*Disclosure: Some of the links above are affiliate links, meaning, at no additional cost to you, Fandom will earn a commission if you click through and make a purchase. Community content is available under CC-BY-SA unless otherwise noted.