Izuku releases the grenade pin and blasts an immense Explosion at All Might at point blank range. After the Explosion is finished, Izuku and Katsuki dash towards the exit. All Might easily tanks the Explosion, coughing up a little blood and only has some minor damage on him . All Might is impressed with the duo's strategy; All Might notes that while their relationship will not improve immediately, Izuku and Katsuki's cooperation with each other in this practical test will be a great leap forward for them in the future. All Might decides to chase after the escaping Izuku and Katsuki, declaring that he will give it his all.

Meanwhile, Momo is creating Russian dolls and informs Shouto what she is creating. Momo is impressed with Shouto for being able to not only think of a strategy against Shouta but also have the judgment to make quick decisions on the best course of action. Shouto tells Momo that its normal; Momo admits that even though she is a recommended freshmen she is the only one that hasn't shown any noteworthy practical results.

Suddenly, Shouto realizes that Shouta is nearby, causing Momo to apologize for talking too much. Out of the blue, Shouta appears from above, hanging from telephone wires. Shouta comes down and Shouto leaps into action, trying to attack Shouta but misses. Shouto orders Momo to run away to which she does.Shouta wraps his cloth around Shouto and then suspends him in midair from telephone wires, tying Shouto's bonds to a telephone pole. Shouta admits that he had always planned on capturing Shouto. However, Shouto points out his teacher's flaw, that he can break free from his bonds by using fire or ice. Shouta tells Shouto that he can break free but warns him to watch out when he drops; Shouta throws caltrops (spikes) underneath Shouto to act as a deterrent for Shouto. Shouto compliments his teacher for a nasty counter. Shouta tells Shouto that his strategy's responsibility is lopsided, commending him for giving Momo consideration but points out that he should have discussed his strategy with her a little more.

Momo is running away from the battlefield. While running, Momo is conflicted and confused on what course of action to take, unable to decide if escaping is the best option or going back to help Shouto. Shouta appears in the air and launches a cloth at Momo which wraps around her arm. Momo tries to break free; she realizes that her Quirk hasn't being erased. Momo creates a bracelet from her bandaged arm, allowing her to break free; Momo continues to run. Shouta notes that Momo keeps comparing herself to Shouto because he has what she lacks; confidence.

Shouto is still hanging suspended from the telephone wires, thinking about what Shouta said. Suddenly, Momo appears and apologizes to Shouto. Momo is unable to decide what to do; rescue Shouto or escape. Shouto apologizes to Momo for not taking her ideas into consideration and sees that Momo has something in mind. Momo says she does but it wouldn't work if Shouto's plan fell flat. Shouto encourages Momo to put her plan into action, telling her that he voted for her during the Class President election. Shouto's encouragement fills Momo with confidence; Shouta appears above Momo, preparing to attack her. Momo tells Shouto to close his eyes and she throws up into the air the Russian dolls she created. The Russian dolls open up to reveal flash grenades in them; the flash grenades create a brilliant light that causes Shouta to avert his eyes, preventing him from advancing and using his Quirk at the same time. While Shouta is distracted by the light, Momo releases and frees Shouto from the telephone wires; Shouto lands safely onto the ground. The confident Momo declares to Shouto that she does have a plan to prevail over their opponent; Shouta smirks. 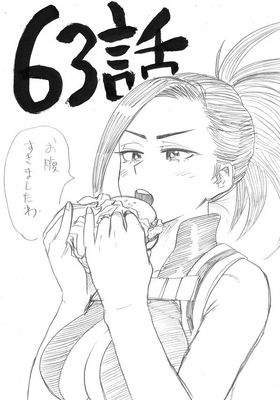 Retrieved from "https://bokunoheroacademia.fandom.com/wiki/Chapter_63?oldid=37616"
*Disclosure: Some of the links above are affiliate links, meaning, at no additional cost to you, Fandom will earn a commission if you click through and make a purchase. Community content is available under CC-BY-SA unless otherwise noted.