At the end of the week, workplace training comes to an end. Outside Gran Torino's apartment, Izuku thanks Gran Torino for looking after him and training him; Izuku praises Gran Torino for his training as it has allowed him to become stronger. Gran Torino advises Izuku to maintain his control and composure when using One For All and to not go over the 5% limit. Izuku says that he will comply. Izuku asks Gran Torino a question; why a strong Hero like him isn't known by society. Gran Torino replies that he wasn't interested in the Hero life and that the only reason he became a certified Hero was for a certain goal and nothing else. Gran Torino tells Izuku to ask All Might about the whole story. As Izuku leaves, Gran Torino ponders that both All Might and Izuku are alike; having the same charisma. Gran Torino asks Izuku his name; Izuku thinks than Gran Torino went back to being senile, but realizes what he wants as an answer. Izuku tells Gran Torino that his name his Deku. Gran Torino smiles at the response, turns around and goes back into his apartment.

Class 1-A returns to U.A.. In Class 1-A, the class discuss their workplace training experience. Eijirou and Hanta laugh at Katsuki's hairstyle, causing Katsuki to retaliate. Mina, Tsuyu and Kyouka talk about their workplace training; they ask Ochako how her experience was, to which she replies that it was fruitful. Denki asks Minoru how his experience was with Mount Lady, although Minoru answers while quivering, telling Denki that he doesn't know what women truly are. Denki notes that the people who improved the most are Izuku, Tenya and Shouto because of their encounter with the Hero Killer; Hanta and Eijirou are glad that they are alive and alright while Momo says that she was worried. The class notes that they were rescued by Endeavor, to which Shouto replies that they were with Izuku agreeing. Denki comments that the Hero Killer was terrifying, but what he did at the end seemed cool. Denki tries apologizing, but Tenya says its fine because he understands if people find the Hero Killer "cool" due to his convictions. However, Tenya criticizes the Hero Killer for advancing his conviction with a purge which eventually led to his downfall. Tenya declares that he resolves to become a Hero anew in order to not follow the wrong path, causing Izuku to smile.

Class 1-A's next class is Foundational Hero Studies with All Might. All Might says that their lesson will be a rescue training race through Playing Ground Gamma (a construction site with many densely packed lanes which makes it look like a labyrinth). The class must race through the construction site and to the area in the middle to meet up with All Might. Class 1-A will split into four groups of five for the training lesson. Izuku, along with Ojiro, Tenya, Mina and Hanta are the first group that will partake in the rescue training race. The class comments on who will win; Momo and Kyouka note that Izuku is at a disadvantage due to his grievous Quirk with Katsuki saying that Izuku will lose; others think that Tenya, Ojiro, Sero and Mina all have an equal chance at winning.

The race begins; Izuku activates One For All Full Cowl and begins maneuvering through the construction site with ease; using his enhanced speed and agility to jump and move through the construction site. All Might, Shouto and Ochako note his extraordinary movements while the rest of the class are surprised by Izuku's skills. Katsuki is shocked that Izuku's movements in combat have become similar to his own, angry that Izuku has improved so much. However, while moving towards the area, Izuku accidentally slips, causing him to lose his lead and arrive last while Hanta places first After the race ends, All Might commends the group on improving their Quirks more broadly since entering U.A.. He asks them to prepare for the end-of-term test. All Might then approaches Izuku, telling him that he is impressed with his improvement and gives him a thumbs up. All Might tells Izuku that after the lesson is finished, he should come to his place because he wants to talk to Izuku about the story of him and One For All. 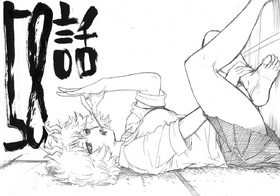 Retrieved from "https://bokunoheroacademia.fandom.com/wiki/Chapter_58?oldid=37611"
*Disclosure: Some of the links above are affiliate links, meaning, at no additional cost to you, Fandom will earn a commission if you click through and make a purchase. Community content is available under CC-BY-SA unless otherwise noted.