Using her Quirk, Kuin can create and control bees with special abdomens, which she usually uses to transport different substances such as Trigger, toxins and blood samples. However, when the situation forces her to fight, she can create a type of highly explosive bee called Bomb Bees.

Bomb Bees carry explosive substances in their abdomen, and detonate when ordered to. Kuin usually sends a swarm of these bees against the enemy, wrapping the foe and exploding. However, the damage done does not appear to be large, and she can only make a few of them, because using her bees as a weapon in straight combat is incredibly risky to Kuin, as their destruction recoils on her. As such, usually only the first bee to explode is a real Bomb Bee, and the ones created after the first are simple firecrackers used as bluff.[1]

Only in desperate situations, when Kuin is willing to sacrifice the life of her host, will she create a genuine swarm of Bomb Bees.[2] 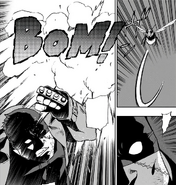 A Bomb Bee in action

Retrieved from "https://bokunoheroacademia.fandom.com/wiki/Bomb_Bees?oldid=241003"
*Disclosure: Some of the links above are affiliate links, meaning, at no additional cost to you, Fandom will earn a commission if you click through and make a purchase. Community content is available under CC-BY-SA unless otherwise noted.