My Hero Academia Wiki
Start a Wiki
ALL POSTS

1. Can copy Emitter and Transformation. Still unconfirmed if he can copy Mutant, but usually assumed he cannot much like Erasure.

2. Definitely. All Quirks can improve and evolve their characteristics. Im hoping Monoma will learn to recall and store quirks he has copied, instead of immediately having to use them.

3. No, it can't, for now he can only use one at a time, though heres hoping he does learn how to do that

Visit the Copy Quirk profile, this is all already answered 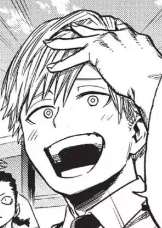 Description: User is able to synchronise their body movements to different types of speed. User is able to synchronise to both physical objects and sounds, being if they were to copy the speed of an opponent, they replicate the heartbeat of the opponent, and copy the opponents internal chemical reactions and speed. This makes them just as fast as the opponent, however with no stamina loss or muscle strain for that period of time. The user finds it easier to link their speeds to the timing of sounds, usually music. Their mind automatically records the BPM of the music, as long as the user can react to it at base, making them able to move at that sort of timing.

-User has a limit to the speed they can replicate. They are unable to replicate any speed above Mach 1 (while they are a student of course), and the higher speeds they can replicate are rare, as they vary on the speed of the opponent, or ridiculously fast music beats they would have to react and listen carefully to.

-There is a time limit of 10 minutes at maximum they can maintain speeds.

-The more damaged their body is beforehand, the shorter the time limit they can maintain these speeds.

-In order to record timings and replicate heartbeats, it requires a level of mental focus so that the mind can scan and replicate the speed. Other sound based quirks or just general inability to process a thought can give this quirk a hard time

-User has an automatic scanner built into their costume that is linked to the users neuron pathways. This allows the user to replicate sounds and heartbeats from much further away, as well as automatically record the highest BPM in the area and not require as much mental process from the user to copy. Though, if broken but still attatched, it decreases the efficiency of the quirk to even lower than the base use.

Description: I would be able to reflect the direction of any moving object to my will, including living and non living things. I would not be able to alter the speed, and forces such as friction and gravity would still affect the objects (example, if i reflected something to go up, it wouldnt travel as far in the air as it would left/right). I can also misdirect things such as Energy Waves that arent necessarily solid.

It can be used effectively in close range combat, such as to trip opponents (by reflecting them up) or misdirect their attacks or ranged projectiles

-Must be able to react to the moving objects

-There is a limit to how much i can misdirect depending on sheer kinetic power. So it would require more energy input for me to reflect the movement of something heavy like a truck, and it would change direction at a slower pace

-Struggles with Danmaku type attacks (multiple attacks at once).

-Would be able to reflect light waves that reach me, so i can turn invisible (though  drains a lot of my stamina, and i can only use it effectively in short bursts)